Orionid Meteor Shower: All You Need to Know 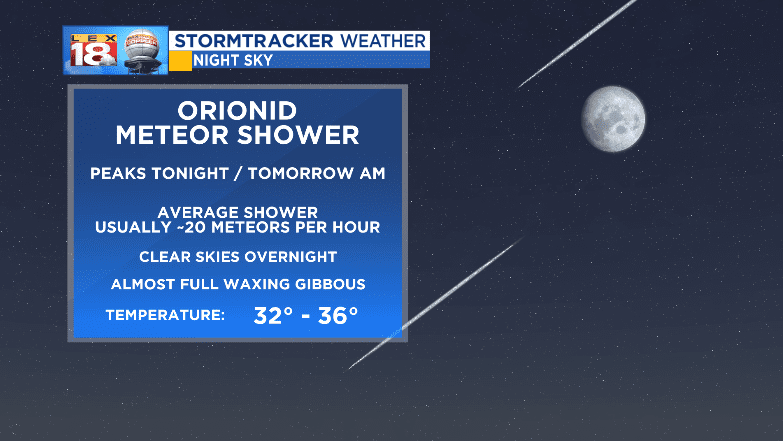 Good news! We have another meteor shower happening tonight. That’s right. The second shower of October peaks overnight and we have a chance to see it, although the moon may prove to be annoying.

The Orionid Meteor shower peaks annually around the back half of October as the earth passes through the debris leftover from Halley’s Comet. That’s right, every year around this time, we get a little taste of the comet that won’t be visible from earth again until the year 2061. The Orionid shower runs every year between October 15th and 29th but peaks around this time of the month.

The Orionid is an average shower, boasting roughly 20 meteors per hour, on average. However, sometimes the shower can produce as much as 80 per hour! This year, we have optimal viewing weather-wise, but the pesky moon is going to add a lot of light pollution this year. The almost-full waxing gibbous will be bright enough to wash out all but the brightest meteors. It will also be pretty cold outside tonight as temperatures will dip down into the 30s.

Best chance to view the shower will be after midnight from a very dark location somewhere far away from city lights. Have a thick jacket and something warm to drink. Even with the bright moon this year, you may be able to catch a few of the bright meteors which can be about the size of a grain of sand but whiz by at a speed of 148,000 mph!