The End of the Growing Season

After the recent cold mornings, the National Weather Service in Louisville and Jackson, our local offices, announced Monday that the frost/freeze program has ended. Frost advisories and freeze warnings won’t be issued until next spring. This signifies the end of the growing season. 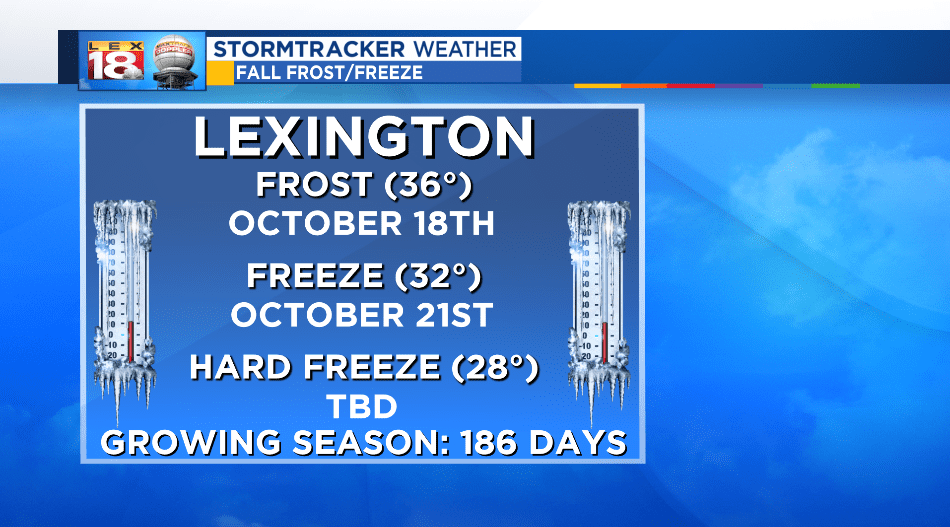 The first freezing temperatures of the season bring an end to the growing season. The 2018 growing season lasted 186 days, which started on April 17th.

The first hard freeze, low at or below 28°, has yet to be recorded in Lexington. However, a few outlying areas reached this benchmark with last week’s cold temperatures. The average first hard freeze occurs in early November. It looks like we’ll hold off the freezing headline for a little while yet.

It has cooled back down again followed the passage of a cold front last evening. Daytime highs will be in the 50s, and the 40s this weekend, with lows in the mid 30s. We are tracking a few morning frosty morning, but overnight temperatures are expected to stay away from the “hard freeze mark.” There are signs of a pattern change into early November. We could be flipping back to above-normal temperatures. The first hard freeze of the fall will hold off.