Severe thunderstorms during the fall months aren’t out the ordinary. Outbreaks for severe weather peak during the “transitional” seasons – spring and fall. While spring storms may be fueled by contrasts in temperature and instability, shear, or changes in the wind’s speed and/or direction, is driver during the fall. A tightly wound storm system will produce a squall line, which will be at the center of Monday night’s severe threat. 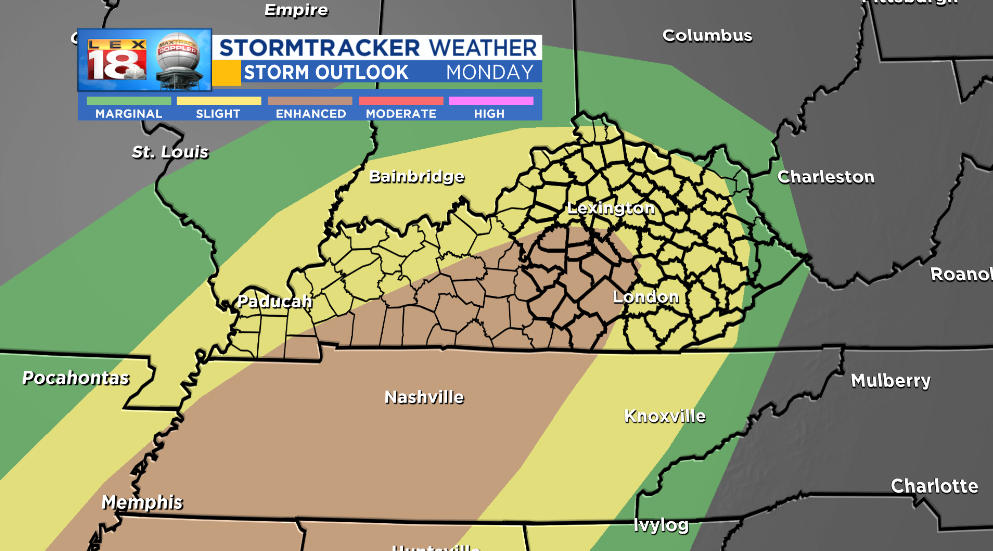 Since Friday we have been tracking the potential for a potent and progressive autumn system to sweep through the Bluegrass. The timing has been tweaked a bit, but the impacts were fairly constant. A low tracking out of the Midwest will linger a line of strong to severe thunderstorms across the Ohio and Tennessee Valleys. The hot spot for severe storms will be just to our south. But we are still tracking a slight risk for severe thunderstorms across central and eastern Kentucky.

Even though we are 24 hours or so out from seeing the line of storms, there is still a bit of uncertainly as to how this event will pan out. It comes down to what happens during the day Monday. 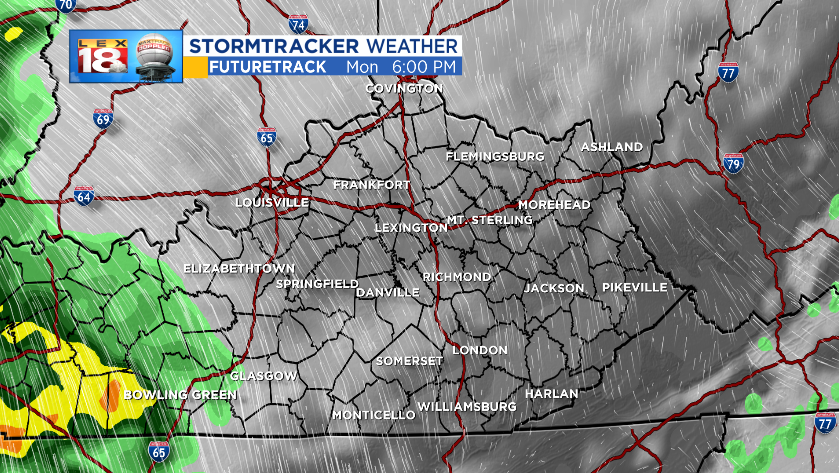 It is becoming more clear that strong to severe thunderstorms will track in late Monday night. But how strong will the line be? Well if it stays dry during the daytime on Monday, storms may be fairly strong or a few more may turn severe. Solution #1 – no storms until Monday night. Instability, one of the ingredients needed for thunderstorms, will build up throughout the day. Combine the instability with strong shear/wind, we’ll likely see a decent squall line. Solution #2 – a few showers or storms develop. This will rob the atmosphere of surface instability, or energy. Monday’s night round of storms would be “weaker.”

Solution #1 looks to be the more likely outcome at this point. Stay tuned Monday. We’ll be tracking any changes. 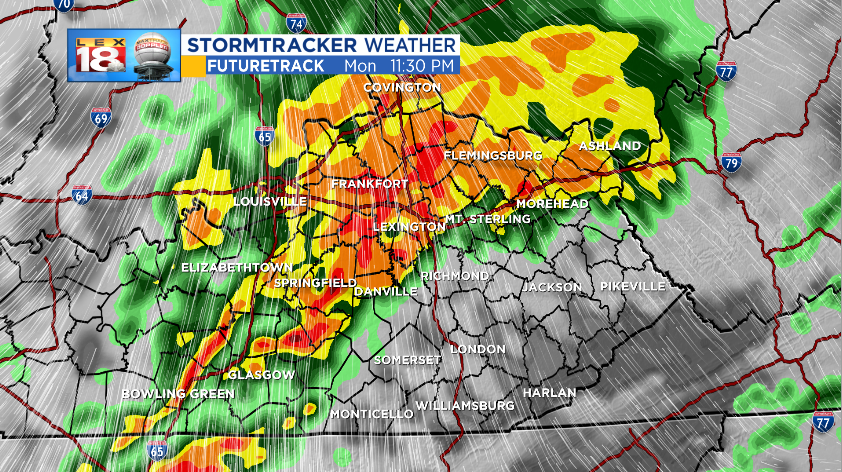 Arrival time – We are tracking the line to reach I-75 and the Bluegrass between 10 PM and 12 AM. Areas west and southwest of Lexington will see storms earlier; to the east later. Despite the nighttime arrive there will be plenty of thunderstorm “food” to sustain the line through the coal fields and off into West Virginia. Central Kentucky will be in the “warm sector,” or the area between the warm and front front. This region is prime for storm development. 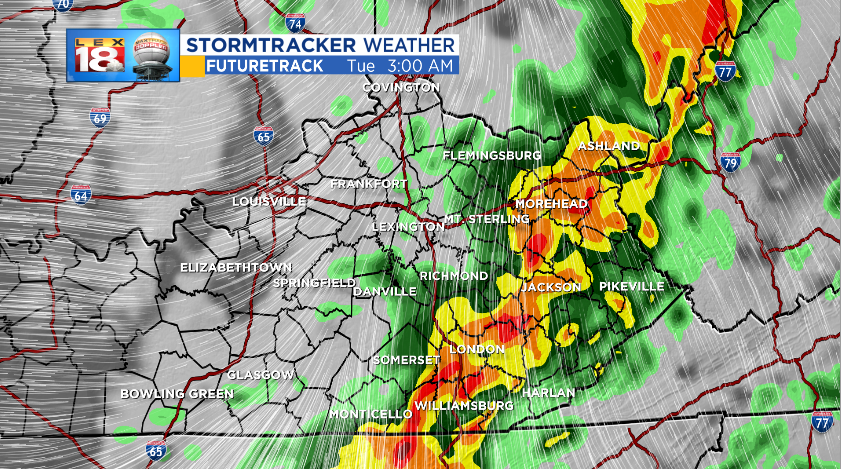 These storms will be hauling. A cold front will be pushing this squall line along through the wee hours of Tuesday. The latest run of Futuretrack (from Sunday late afternoon) has the back edge of storms clearing Lexington by 3 or 4 AM. Eastern Kentucky will be in the thick of it by that time. The entire line will clear the Commonwealth around the time the polls open on Tuesday. 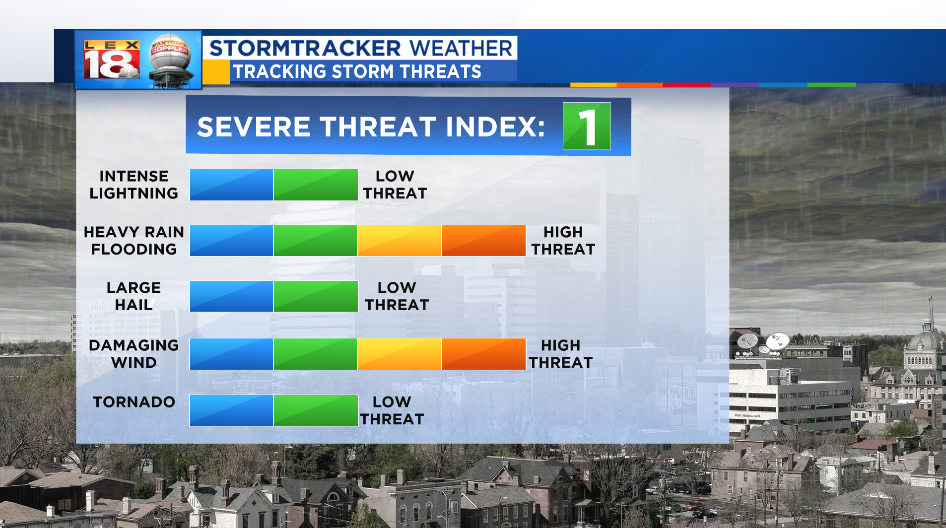 Given the nature of this mode of severe thunderstorms, damaging wind gusts will be the primary threat. Environmental winds push the line of storms along. The combination of the strong winds within the thunderstorms and the prevailing wind will result in strong straight-line winds. Heavy rain with localized flash flooding will be another threat. Most models show one to two inches of rain will possible during the six or so hours that these storms track through. The threat for isolated spin-up tornadoes is lower but not zero. Brief spin-ups are possible with squall lines, especially if the line starts to break. Vortices on either side of break develop and can lead to tornadoes. Large hail will be more of threat for severe storms to our south.

Putting everything together – the LEX 18 StormTracker Severe Threat Index will be raised to at least a Level 1 beginning Monday afternoon. The time to be aware of strong and severe thunderstorms will be from 10 PM Monday through 7 AM Tuesday. Storms will arrive in western counties first. Since this event will occur at night, likely while you’re trying to sleep, be sure to have a way to get weather alerts. The LEX 18 StormTracker Weather app will send weather alerts to your smart phone.

It will remain gusty following the passage of the cold front on Tuesday. We are tracking winds to gust up to 40 mph during the afternoon. Temperatures will start dropping and skies will clear.