Leonid Meteor Shower: All You Need to Know

Tonight peaks the Leonid Meteor Shower! Problem for us, is it’s not the best viewing conditions. That’s right, cloud coverage increasing tonight along with early morning fog will be an issue for us. You may have a chance to view the shower after sunset when skies darken, if you’re lucky enough to be out of the clouds. However, the 68% waxing gibbous may create some light pollution to contend with. Overall, this is not a very good chance for us to view the shower. 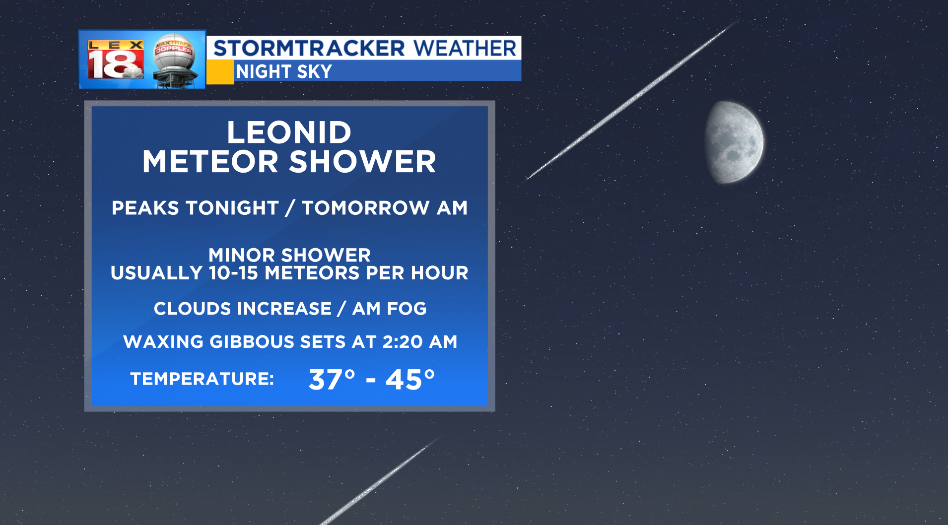 The best news is this is only a minor shower. There will be better ones in the months to come, especially the Giminids in December. Let’s look at a brief rundown about the Leonid shower.

The Leonid is a minor shower with roughly 10-15 fast-moving streaks per hour at the peak. The peak is tonight and tomorrow morning, but the shower runs annually from the beginning of November to the end. So if you don’t get a look tonight/tomorrow, you may be able to see a few streaks later in the month.

The Leonid is a unique shower in that it goes through a cyclonic peak every 33 years. This means the earth passes through the part of the comet debris that is the most dense every three decades. The last time we passed through the peak was in 2001, so the next year will be 2034. Another interesting fact about the Leonid shower is the speed at which the comet debris hits our atmosphere. The particles ram into our upper atmosphere at 45 miles per second!

The shower is the result of debris left by the comet 55P / Temple-Tuttle, which shed it’s debris roughly every 33 years when it passed close to the sun. The reason we’re not seeing much from the debris field in recent years is because we’re passing in the field when the comet only shed a few particles. When we reach the perihelion of the comet path (in the year 2034) we could be seeing a few hundred meteors per hour on the peak!