The best meal of the season is almost here and we actually have great weather to go along with it. Skies have cleared due to high pressure and the only thing we’re tracking is a cold front drier than the Turkey!

A band of clouds will move in later today and stick with us through Thursday as the front stalls and eventually lifts back north. Therefore, we’re going to remain partly cloudy through Turkey Day. Temperatures will remain cold in the morning, starting in the 30s. The afternoon will still be pretty chilly as we only reach the upper 40s. So bundle up, but the kiddos will have a great time outdoors to work off all the food. 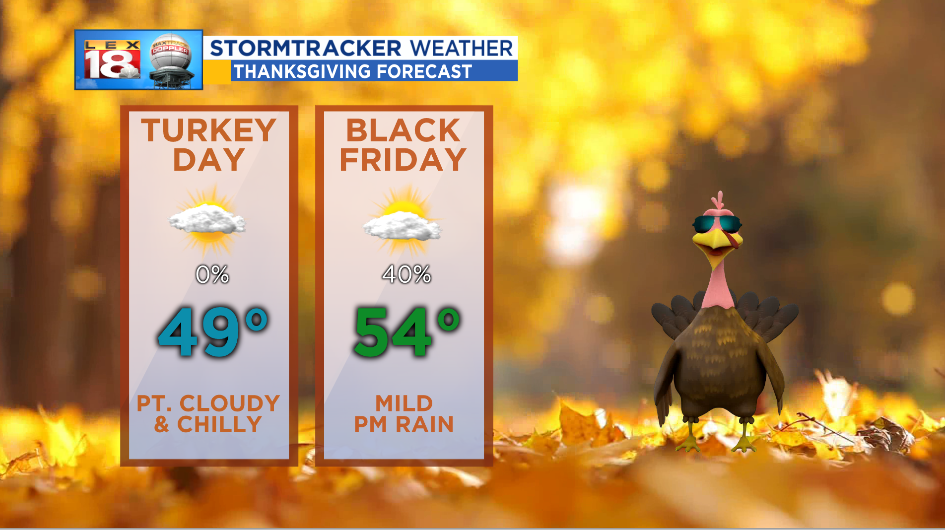 Black Friday will also be nice most of the day. In fact, a warm front will bring back some sunshine, and temperatures will warm into the mid-50s! So you’ll be a little more comfortable when grabbing those Black Friday Deals. That being said, if you’re planning on waiting in the morning lines, it will be cold, so have a thick jacket.

Looking back at past Thanksgivings, there’s quite a variety of weather conditions we’ve experienced in Kentucky. We’ve had anything from heat, to bitter cold; plenty of rain, and even some snowy days.

This year may be nice and dry, but the wettest Thanksgiving occurred in 1959 when 1.17” of rain fell through the day. The snowiest day occurred 80 years ago when 4.2” of snow fell. Due to that snowfall, 4” of snow on the ground was the highest recorded snow depth of any Thanksgiving.

Have a safe and wonderful Thanksgiving everyone!