The Last Frontier is no stranger to earthquakes. In fact, more earthquakes are registered in Alaska each year than in any other state. More than California and Oklahoma. The most powerful earthquake in U.S. history severely damaged Anchorage in March 1964. This magnitude 9.2 earthquake lasted four and a half minutes, and could be felt all over Alaska, in parts of Canada and Washington state. 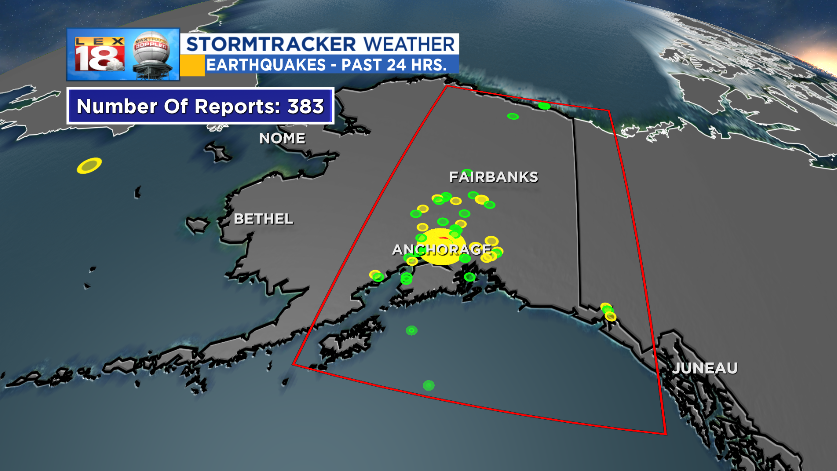 Today’s 7.0-magnitude quake is just the latest to strike the 50th state. It was centered seven miles north of Anchorage, 27 miles below the surface. Dozens of aftershocks rippled through the area in the hours after the strong earthquake, including a magnitude 5.8. As of 9 PM Friday, over 380 earthquakes with magnitudes greater than 1.0 were registered across Alaska.

It’s common after an earthquake of this magnitude for the seismic waves to radiate through the ground across the continent and the globe. Today’s earthquake was no different. The Kentucky Geological Survey’s seismograph near Elizabethtown detected some of that energy. The blue squiggly line indicates the “shaking” that occurred in western Kentucky. It wasn’t very strong. Folks near E-town didn’t feel it. By the time the shock reached the Commonwealth, the seismic activity had considerably weakened. 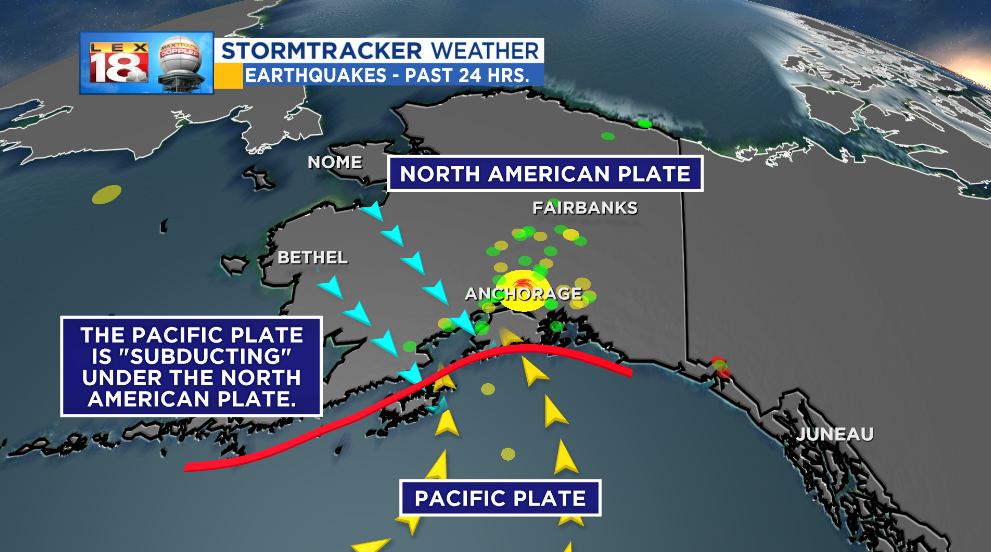 Back to Alaska, earthquakes have build the landscape. There are two tectonic plates that are duking it out. The Pacific Plate is pushing towards the Alaskian landmass, and at the same time the North American Plate is sliding towards the ocean. The dense oceanic rock thrusts underneath the continental rock creating a subduction zone. It’s in this area that earthquakes commonly occur, and why Alaska registers so many quakes each year.

The Alaska Earthquake Center detects an earthquake every 15 minutes. The total for this year has climbed over 44,000. Over the last five years, there have been 150,000 earthquakes in Alaska. During this time, 31 quakes have been magnitude 6.0 or greater; four were at least a 7.0. And 75% of all earthquakes in the U.S. with 5.0-magnitude or stronger have occurred in Alaska.