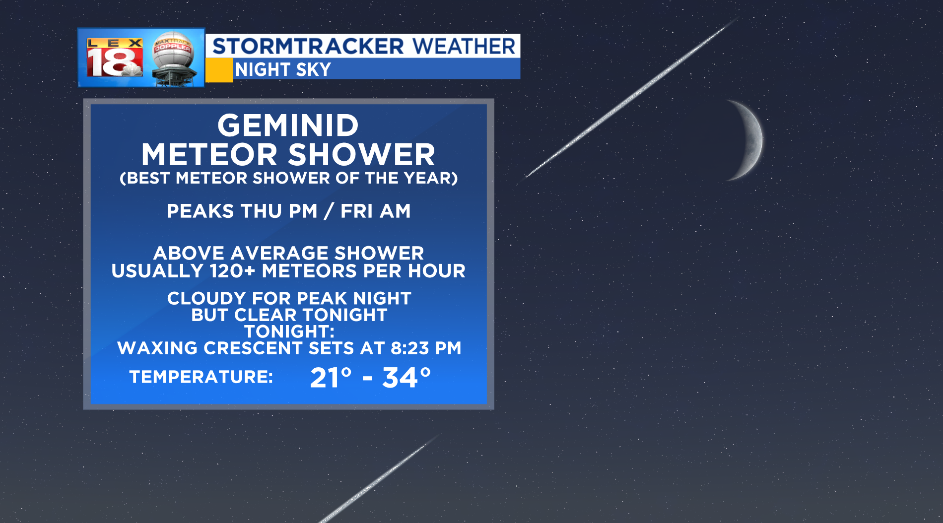 It’s not even close…the Geminid Meteor shower is the best of the year and it peaks in just a few days. It can produce meteor rates of hundreds per hour on peak night! Astronomy enthusiasts circle the calendar each year with hopes to get one of the best celestial shows in the night sky.

Unfortunately, this year doesn’t bode well for Kentucky viewers. A pesky low bringing plenty of cloud coverage will try to block the night sky for us. Cloud coverage will be stout but you may get lucky with a few breaks from time to time. Temperatures will run in the 40s or upper 30s, so if you plan to take a look, have a warm jacket. This year, the moon on peak night sets at 11:10 p.m. allowing for the skies to grow dark shortly after. For those who can see the event, it will start getting good around then.

If you don’t want to try your luck on the peak night, try heading outside after midnight tonight and you will still get a good looks at some meteors. Once again, it will be cold. Temperatures tonight will range from the low 20s to low 30s. You may not see the 120+/hr possible, but you’d still get more than most showers during the year. Tonight’s moon sets at 8:23 p.m. giving you more time to see meteors as they light up. Find a dark place, far from city lights for the best show.

The Geminid is one of the few showers that are active all night. Most meteor showers don’t really get going until after midnight, but even with the moon’s glare, the spectacular meteors find a way to illuminate enough for us to see.

The reason for the amazing show each year is the object that is creating the debris field we pass through. 3200 Phaethon is a hybrid of a comet and an asteroid. The object, comprised of mainly rock and ice, orbits the sun every 550+ years. Some astronomers believe that the shower increases in intensity every year, and has done so since it was first discovered in 1862!

Next year’s shower will occur during a full moon, so if you don’t catch the Geminids this year, it may be the 2020 showing that you’ll have to catch.