If you’re an avid night sky observer, you have probably heard that the brightest comet of 2018 is passing close to earth this month. This is an exciting event! While not the most impressive comet in terms of brightness, it is still something everyone can enjoy. The best part is, we have a few clear nights coming up which will be prime for viewing.

46P/Wirtanen only comes this close to earth every 5.4 years. The tiny ball of green light can be seen with the unaided eye, but it’s best seen through binoculars or a telescope. The closes approach actually occurred early Sunday when the comet was only 7,199,427 miles from earth or roughly the distance it would take to make 30 trips to the moon. While this may seem far, it’s pretty close, astronomically speaking. This pass by is particularly great because it’s the closes pass that 46P has made in centuries and will make again for centuries.

With the help of the constellation Orion, you’ll be able to see the tiny green ball of space debris through the coming days. Find Orion in the night sky (easily distinguished from the stars making “Orion’s Belt”). Comet 46P will be passing to the right of the constellation and each night will be positioned a little further higher in the night sky. Skies will clear tonight as higher pressure moves in and skies will remain clear through Wednesday morning. So you’ll have plenty of opportunity to view the event.

The comet will be visible through the beginning of January, but keep in mind that the glow from the comet will become fainter with each passing day. So if you really want the best look, I would suggest you head out in the next few days. The only problem with this is the moon. Moonset times the next few mornings will not be until after midnight. The moon sets at 3:05 a.m. Tuesday. The moon is also growing from half full to it’s waxing gibbous phase which started Sunday. Once the moon sets, if you are in a dark enough location (away from city lights) you should be able to make out the faint green glow. Have a jacket with you because the next few nights will get down to and below freezing.

Comet 46P/Wirtanen’s constant passes by the sun has really taken a toll on the ball of ice. Due to the repeated passes, a lot of the ice has been shed off and therefore any material that could make a bright “tail” has since left. Also, another reason for 46P’s dim nature is the extremely small nuclei (core). The nuclei of 46P is *only* 0.7 miles wide. It’s one of the smallest comets known to scientists.

Don’t miss this opportunity to see a pretty cool sight in the night sky. It won’t be back for another 5.4 years! 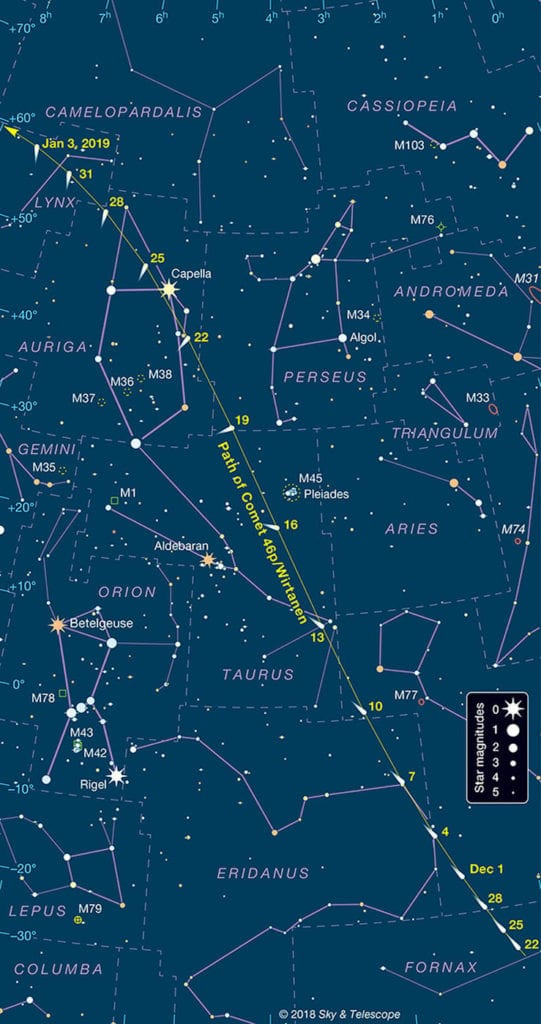