Snow has been hard to come by so far this season. Since November 1st, Lexington has picked up 1.1 inches of snow. Most of that snow fell in November. We average around four inches of snow by this time in the season.

We’ll add to our season snowfall total over the coming days. We are tracking a winter storm that will spread periods of rain and snow across central Kentucky this weekend. Snow will arrive late Friday night or early Saturday morning. It won’t remain all snow. The forecast isn’t that cut and dry. Over the past few days we have been noticing trends that the rain/snow line, or freezing line, has been drifting north. Chief Meteorologist Bill Meck highlighted this trend in his blog post on Tuesday. 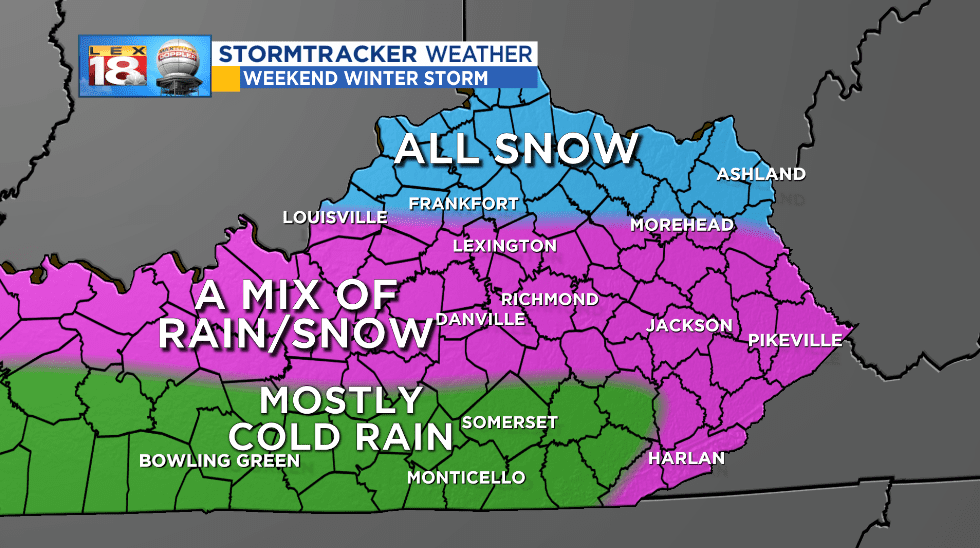 Computer models are in agreement, and so are we, that a bubble of “warmer” air will bump northward into the Bluegrass. This will lead to the transition from snow to rain Saturday afternoon. The changeover will occur more quickly across southern Kentucky. Areas near the Tennessee border will be closer to the track of the low and will see mostly a cold rain. For the Bluegrass, we are tracking periods of rain and snow throughout the weekend. It appears I-64 will be as far north as the warm air goes. Again with the trends. Northern Kentucky looks to stay all snow from start to finish.

We are tracking another wave of snow on the backside of the low later in the day on Sunday. Additional accumulation will be possible before the snow wraps up Monday morning.

Now for what everyone wants to know. “How much snow will I get at my house?” Here is our first call for weekend total snowfall amounts. Higher totals are expected for northern Kentucky. Makes sense; these areas will see all snow this weekend. Amounts will be less to the south. One to three inches will be possible for most of central Kentucky. Remember some rain will be mixing in. So snow that sticks during Saturday morning’s round could melt before more accumulates on Sunday.