We’re starting the first week of February and with it will be a completely different feeling. Warmth is what I’m talking about! Temperatures go up and stay up all week, and the only drawback will be rainy days. Going back to January, the record books will show the first month of 2019 to be a pretty average month. No big records were broken, and the big three (temperature, precipitation, and snowfall) all had similar numbers to average. Let’s recap: 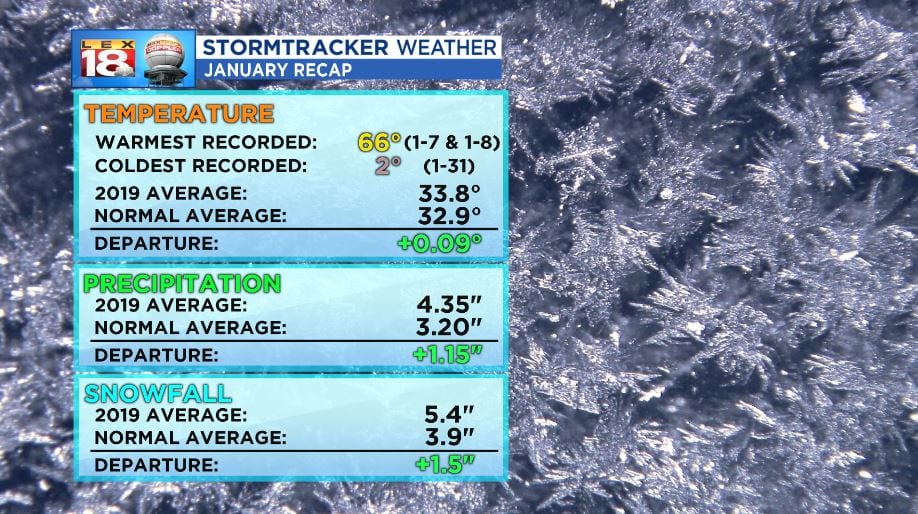 Temperature was the closest to normal of the big three. The average for the entire month ended at 33.8 degrees which was 0.09 degrees above average. That’s pretty much on point for the month. The warmed temperature recorded was 66 degrees on the afternoons of the 7th and 8th. The coldest temperature of the month was 2 degrees which came during the deep freeze last week. When looking at each day individually, 17 days were above average in mean temperature, and 14 days were below.

Snowfall was the most impressive stat of the month. January typically averages 3.9” for January, but we surpassed that by an inch and a half totaling 5.4.” The majority of that snow fell on the 12th of the month totaling 2.1.” We had 5 days of measurable snowfall, and 11 days with at least a trace amount.