The Anniversary of the March 2, 2012 Tornado Outbreak

Today is somber day in Kentucky weather history. On this date seven years ago the Commonwealth and Ohio Valley braced for a tornado outbreak, the strongest since the Super Outbreak of 1974. There were 18 confirmed tornadoes in Kentucky that day, including several that were violent and long-track. Sadly over 20 people lost their lives and more than 200 injuries were directly related to the outbreak.

There was a “high” risk for severe weather that day across parts of the Ohio Valley. Meteorologists were watching low pressure that was centered over southern Missouri with a warm front stretching east into the Ohio Valley. The day began with showers and thunderstorms. Some morning storms even produce nickel-size hail. By the afternoon central Kentucky was in the “warm sector,” the juicy part of the approaching storm. The atmosphere was ripe for storm development, and strong wind shear would promote tornado development.

The next round of storms blossomed as a strong cold front marched eastward. Severe thunderstorms erupted across the region. Tornadic storms were observed in almost every corner of the Commonwealth. 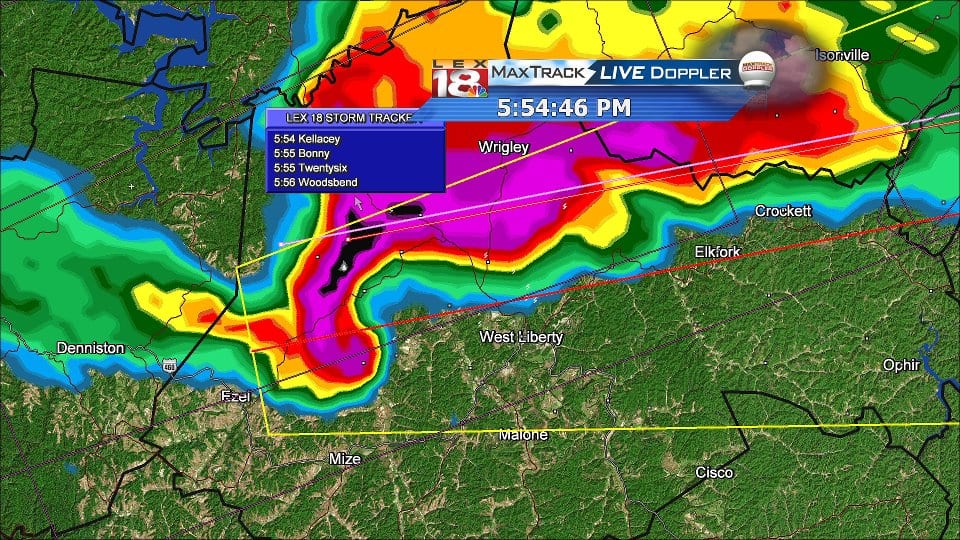 Four of the 18 tornadoes were in the LEX 18 viewing area. Eastern Kentucky experienced some the most devastating damage. The MaxTrack Live Doppler was an invaluable tool that day. It showed the importance of having a LIVE and LOCAL radar. The above image is the tornadic storm that tore through Morgan County. The signature is a classic hook echo, one of the tell tale signs of a tornado. The ominous looking center was the hail core. The tornado was located where the rear flanking downdraft, or the tail on the southern end of the storm, started wrapping back round. This EF-3 tornado was on the ground for 40 minutes covering 86 miles.

Another EF-3 tornado with maximum winds of 160 mph hit Salyersville. This was another long-track tornado – covering 49 miles in Kentucky and West Virginia in just 50 minutes. Tornadoes were also confirmed in East Bernstadt (EF-2) and Bath County (EF-1).

Seven years later communities have come back stronger. Check out these stories of how residents are remembering that day.