A Blizzard Out West: What it Means for the Bluegrass

On this anniversary of the Great Storm of 1993 we are talking about another impressive late-season winter storm. This one is barreling through the Great Plains today. The reach of this system will extend far beyond the track of the low. Areas from the Rockies to the Plains to the Great Lakes to the Gulf Coast, and everywhere in between will be impacted in some way.

Over the past few days we’ve been telling you about this deepening low that would move out of the Four Corners towards Colorado before hulling it across the middle of the country. The pressure has dropped 33 millibars in 24 hours.This type of rapid strengthening is a process known as “bombogensis.” For bombogensis to occur the central pressure of a cyclone (area of low pressure) must fall at least 24 millibars in 24 hours. This process is not uncommon. We see it often with Nor’easters as these storms interact with cold air plunging south and the warm Gulf Stream. Lower pressure and faster pressure falls results in a more intense storm system.

The central pressure of this winter storm dropped to 972 millibars thus far, which rivals the intensity of a Category 2 hurricane. (Not to mix types of cyclones here. This winter storm is NOT a land hurricane. Just putting the conditions in perspective.) Deeper pressure means a tighter pressure gradient, leading to stronger winds. Wind gusts have already been reported in Colorado and Texas that are equivalent to the strength of an EF-1 tornado. 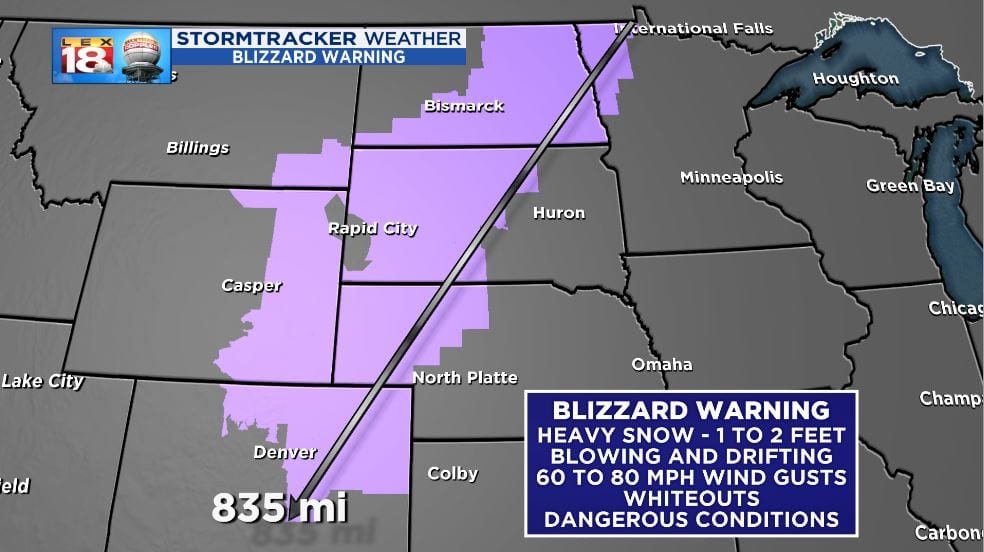 It is not uncommon for “bomb cyclones” to produce blizzard conditions. Blizzard warnings stretch from northwestern Minnesota to Denver, covering over 830 miles. A blizzard is defined by high wind and low visibility, and not necessarily how much snow falls. The National Weather Service specifies that sustained wind or frequent gusts of 35 mph or greater, accompanied by falling and/or blowing snow, which reduces visibility to less than a quarter mile for 3 hours or longer for a blizzard. Wind gusts of 60 to 80 mph are expected across Colorado, Wyoming, Nebraska, and the Dakotas. Whiteout conditions will occur. 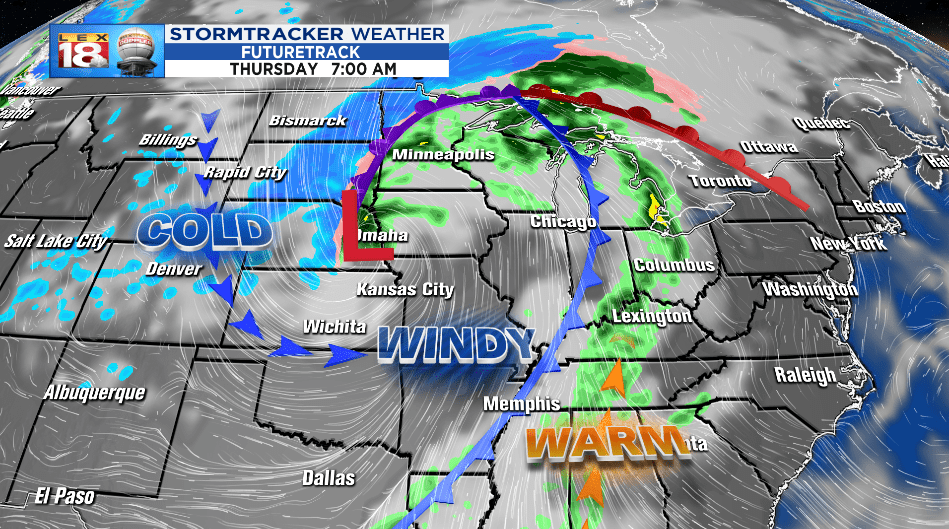 There is no lack of moisture or supply of warm and cold air with this system. The clash of the cold air to the north and the warm air to the south will help the intensification process. The warm conveyor belt will provide plenty of moisture. Heavy precipitation in the form of rain and snow is expected across the Plains and Midwest. Which type falls will depend on which side of the storm you are on.

We’ve already talked about the impressive winter story line with this storm. One to two feet of late season snow is impressive. The screaming low-level winds won’t just ramp up snow production, but it will also result in gusty rain and storms for the “warm” side of the system. That’s where the impacts for central and eastern Kentucky come into the picture. 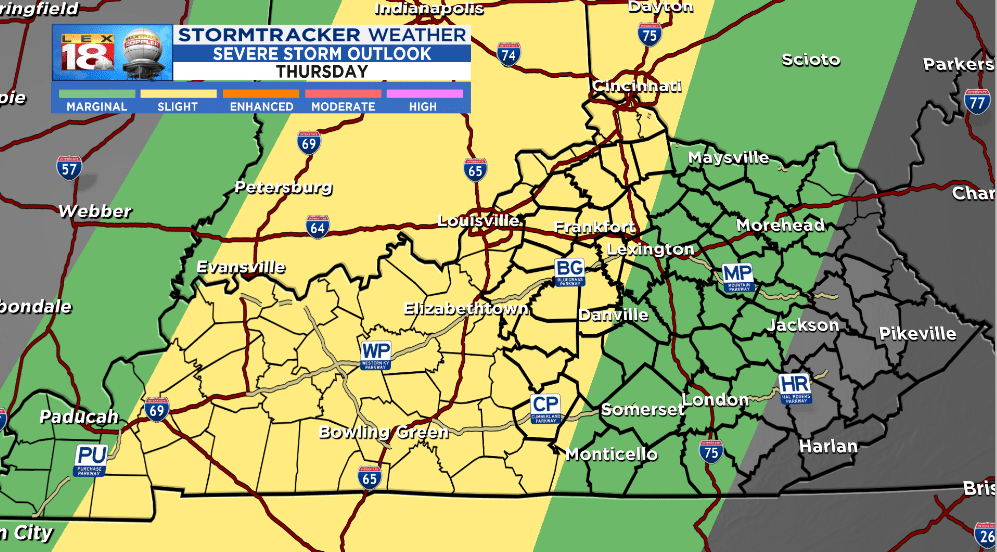 The intersection of Gulf moisture and strong winds will result in the potential for strong and severe thunderstorms Thursday. Central Kentucky is on the eastern edge of slight risk for severe weather. Areas west of I-65 will have a slightly higher probability of severe storms.

Activity will come in waves. Round #1 will move through overnight into Thursday morning. This will be mostly showers. The middle of the day will be dry. There may even be some sun. That sunshine will add fuel to the atmosphere as a line of late-day storms get set to rumble through (round #2.) These thunderstorms will be able to pull down some of those strong low-level winds. Damaging wind gusts will be the primary threat. Isolated tornadoes aren’t out of the question, but a better chance for that will be west of I-65.