The spring flooding season got off to an early start. Locally we dealt with heavy rain and flooding during the month of February. Our threat flooding has diminished, at least until the next soaking rain event arrives. The flooding risk will remain elevated for nearly two-thirds of the Lower 48 through the spring. The potential for moderate or major flooding cover 25 states. 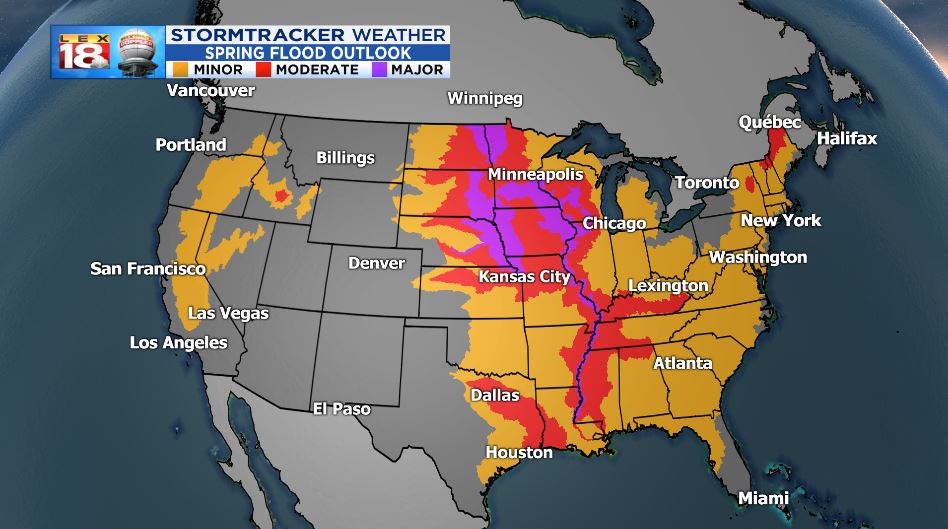 Record winter precipitation across a large swatch of the country already lead to an elevated flood risk. The early flooding got started early as a result of rapid snow melt with heavy spring rain and late season snowfall across areas where the soil moisture is already high. Ice jams exacerbated the flooding across the Heartland.

Additional spring rain and melting snow will prolong and expand the flooding concerns. The greatest risk is for the upper, middle, and lower Mississippi River Basin including the mainstream Mississippi River, Red River of the North, the Great Lakes, eastern Missouri, lower Ohio, lower Cumberland, and Tennessee basins.

The majority of the country is expected to above-average precipitation this spring, which will increase the flooding risk. Additional spring rain and melting snow may prolong and expand flooding.