Weather and the Impact on America’s Pastime

Happy Opening Day, baseball fans! If you’re like me the start of baseball season is the true start of spring.

The baseball season covers about six months out of the year between the regular and post-season. Playing conditions can greatly vary day-to-day at the ballpark. The weather impacts every aspect of the game; on the field and in the stands. It’s not just a question of will rain delay or cut the game short. The impacts could be even more profound on a bright, sunny day.

Temperature and the ball’s trajectory 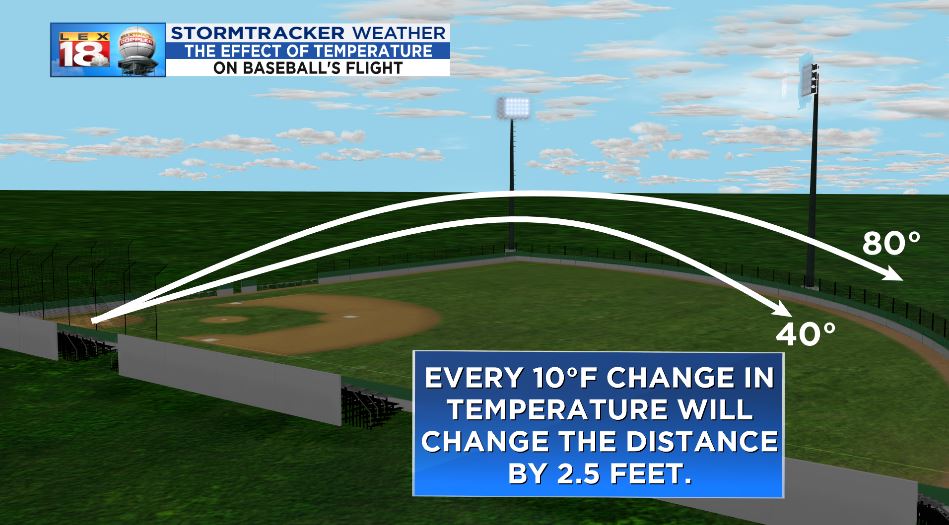 Some sluggers notoriously have a slow start to the season. Shaking off the cobwebs may not be entirely to blame. Imagine watching a game during the colder months, coming off the bat it looks like the ball has enough to go all the way. Then as the runner is rounding second base, the outfielder makes an easy grab just before the warning track.

Now imagine the ball’s trajectory, the bat speed, and elevation angle are all the same, but this time it’s a hot July afternoon. Now the ball easily sails over the outfielder’s head and into the seats for a home run. (Or in the case of my team’s home ballpark, the ball has splashed into the Allegheny River.)

Alan Nathan, professor emeritus of physics at the University of Illinois estimates that for every 10°F increase in temperature a baseball can travel an additional two and a half feet or so. That’s the difference between a fly ball in April and a home run in August, given the same trajectory, bat speed, and elevation angle. 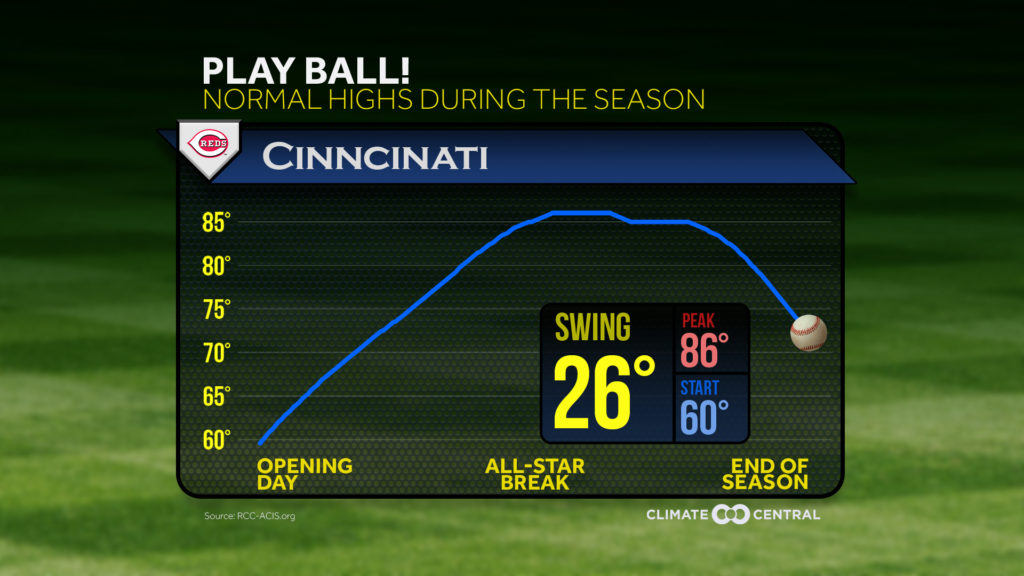 The average high temperature on Opening Day in Cinncinati is near 60° before peaking in the mid 80s around the All-Star Break. The ball could travel an extra six to seven feet during the middle of the season.

In the early years of Coors Field in Denver, home runs were soaring out of the park. It wasn’t just the batters beating up the pitchers. It’s was the composition of the atmosphere in the Mile High City. Denver sits at an elevation of one mile above sea level. Air density decreases with elevation. Due to the lower air density, balls were coming off the bat really fast and sailing over the fence.

A humidor was installed to level the playing field across all 30 ballparks. Baseballs are stored in a controlled environment at 70°F with 50% relative humidity. The controlled conditions will change the coefficient of restriction, or the bounciness of the baseball. After being stored in the humidor the ball becomes heavier and doesn’t come off the bat as fast.

Temperature, the wind, and sunshine

The temperature can affect the pitcher’s feel of the ball. If it’s too hot, the pitcher’s hand can sweat making it difficult to grip the baseball. The cold can make a player’s hand go numb.

Sky conditions can play tricks on the outfielders. A fly ball can get “lost” in bright sunshine or cloudy skies. The ball really pops on a clear night sky.