The joke here in Kentucky is that we don’t really have spring. We’ll jump right from winter to summer. Spring may last a day or two, a week if we’re lucky. But this year we’re actually getting a spring! The grass is greening up nicely. Trees were starting to flower. Daffodils and tulips are beginning to bloom.

Spring 2019 may actually be ahead of schedule for parts of central and eastern Kentucky. The National Phenology Network has developed the First Leaf and First Bloom Indices to measure when spring begins. These models consider the milestones of early-spring shrubs and other plants based on recent temperatures.

The red colors on the map above represent spring leaves that are out earlier than the long-term record for that location. Blue signifies later than normal. Gray indicates an average spring. According to the First Leaf Index spring has arrived between two and weeks early for most of the South, including parts of the Commonwealth. Meanwhile areas through the Corn Belt through the upper Ohio Valley are “behind schedule.” 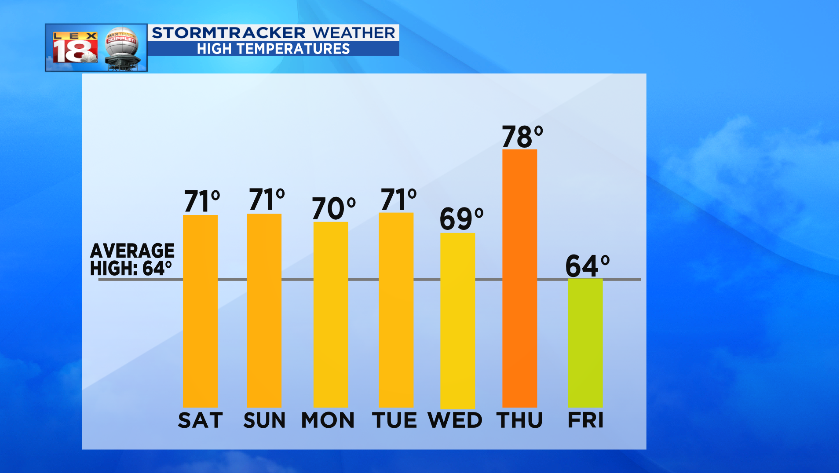 Spring will continue to progress this week thanks to the recent, and upcoming, rainfall plus the lingering warmth. High temperatures are expected to hover around 70° over the next three days before getting jacked up on Thursday. The warmest air of the season will arrive with highs soaring close the 80 DEGREES! (The last time Lexington recorded an 80-degree high was on October 10th, 2018 – it was 83° that day. April 13th is the average date for the first 80-degree day of the year. The earliest high of 80° or warmer occurred on January 24, 1943; the latest was on May 22, 1972.) 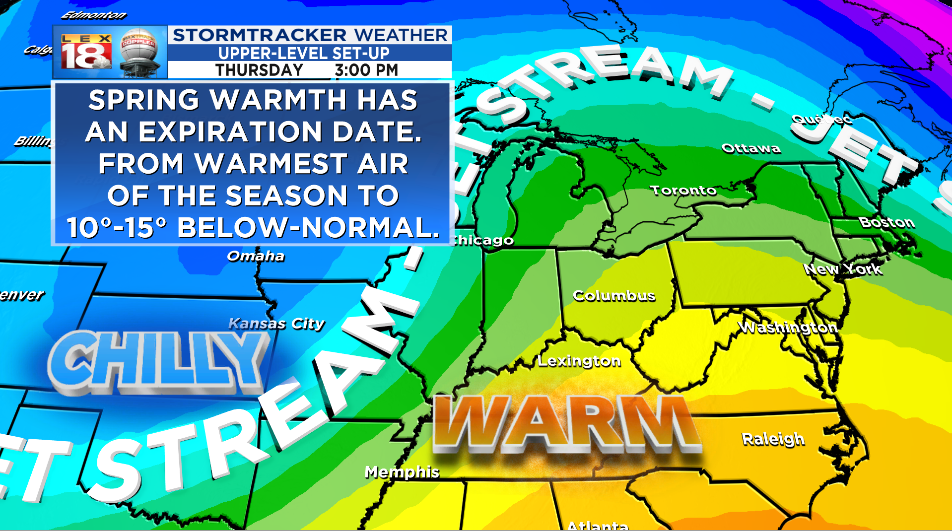 Our spring fever is about to be dashed. A big storm system will be brewing across the Heartland mid-week. A blast of chilly air will drop into the northern tier of the US by Wednesday. A snowstorm is also possible for parts of the Plains and Upper Midwest. It won’t be quite as extreme locally but temperatures will spiral downward into next weekend. Highs will go from near 80° Thursday to the 50s by Saturday. Depending on the track of this low, the blast of chilly air may be more “furious,” occur more quickly, or linger longer. Those are all things that we will be tracking throughout the week as details become clearer.

The 8-14 temperature outlook from the Climate Prediction Center favors cooler than normal temperatures for most of the country through Easter Sunday. It’s not time to make the switch exclusively to your spring wardrobe.