This afternoon Chief Meteorologist Bill Meck and I were talking about how quiet this spring, and the year for that matter, has been. Quiet for a meteorologist may mean something a little different than for you. But we can all agree we haven’t seen a big severe outbreak yet this spring. Even last year was fairly inactive with more heavy rain and flooding issues than anything.

The most recent potential for severe weather came almost two weeks away on April 14th. A Tornado Watch was issued for the Bluegrass. Nothing materialized due to strong shear through the atmosphere, which inhibited the development of thunderstorms, let alone strong to severe ones. The last time Lexington was under a Severe Thunderstorm Warning was August 11th (257 days ago.) It was been 750 days since Lexington’s last Tornado Warning (April 5, 2017.)

So how does this year stack up to years past? We are able to break it down by National Weather Service office. Central and eastern Kentucky fall under the coverage area of offices in Louisville and Jackson. 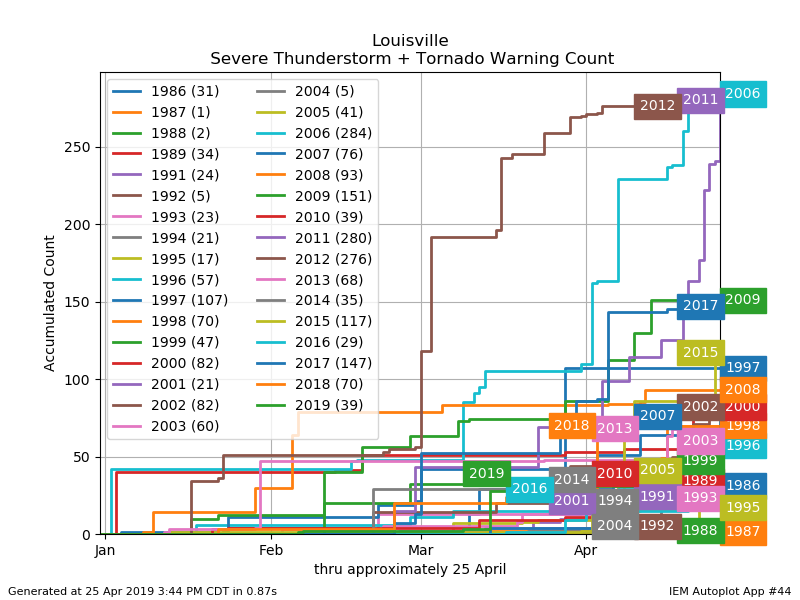 The National Weather Service in Jackson has issued only two warnings so far this year, compared to the nearly two dozen at this point last year. The eastern Kentucky counties in the Jackson CWA average 33 warnings through late April.

The past two springs have been “quiet” for both the Jackson and Louisville weather service offices. The totals for 2012 stick should stick out for a reason. March 2, 2012 is an important day in Kentucky weather history. Twenty-two tornadoes were confirmed across the Commonwealth on that date, including the EF-3 West Liberty tornado.