The first Saturday in May can bring a little bit of everything to the Downs. There has been all-day steady rain, sudden downpours and thunderstorms, sunshine, and even a few minutes of sleet. It has been hot, it has also been chilly on Derby Day. (It has worth noting that weather records for Derby weekend are based on observations at Louisville’s airport, and not Churchill Downs itself.) 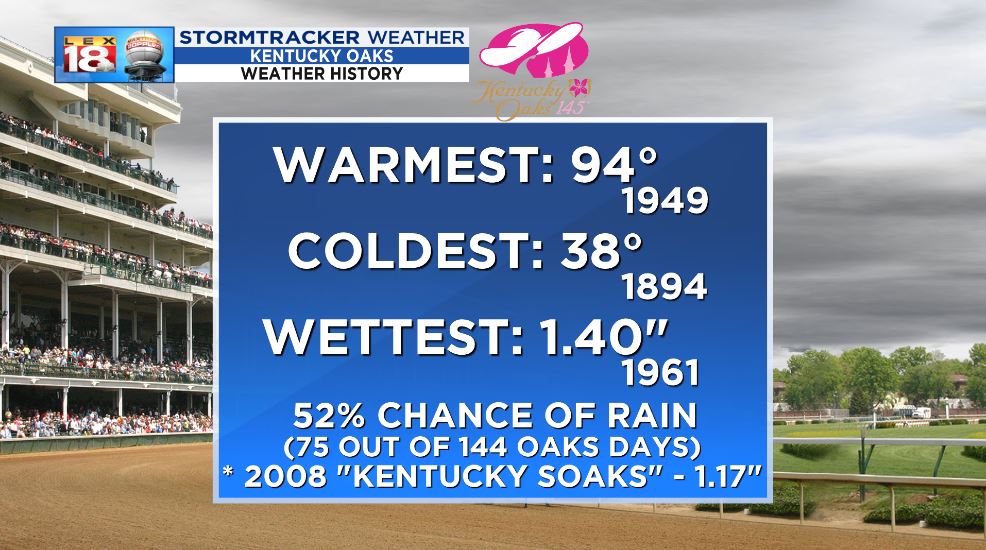 75 out of 144 Kentucky Oaks have included some amount of rain. Five out of the last ten Oaks have been wet. Last year only a trace of rain fell ahead of the run for the lilies.

Who can forget last year’s Derby. Not only did Justify begin his quest toward the Triple Crown, but it was also the wettest Derby Day on record. Over three inches of rain fell at the Louisville airport last year. It may have seemed like a lot more if you were at Churchill Downs. The rainfall broke a 100-year-old record of 2.31″ from 1918.

You also can’t count out wintry weather. Sleet was recorded for four minutes ahead of the 1989 Kentucky Derby.

There is a slightly lower chance of rain on Derby Day – 68 out of 144 years have seen rain. More recently eight of the last 10 years have featured rain at some point throughout the day.