While we bask in the summer-like heat this week, my mind turns to the snowpack in the west. As the Rockies, Sierra Nevada, Cascades, Coastals, and many other mountain ranges dig their way out of a snow-profitable winter, large amounts of water will be returning to the streams, creeks, rivers, reservoirs, and basins.

In 1935 the Bureau of Agriculture Engineering, now the Natural Resources Conservation Service (NRCS), created the Snow Survey and Water Supply Forecasting Program (SSWSF) which was primarily charged with surveying snowpack and forecasting how the melting would influence downstream waters.

The early forms of surveying included hiking, snow-shoeing, or skiing along remote, high-elevation snow courses. It was arduous work and not for the faint of heart. Over time, snow machines aided in the duties. Eventually, aerial markers allowed for flyovers to be conducted, taking out the human element.

It wasn’t until the late 1970s that a new form of technology was introduced that would be fully automated and could relay information in a matter of minutes or hours, instead of days.

SNOTEL (Snow Telemetry) is comprised of remote, stationary sites that collect data and relays that information to the National Water and Climate Center for distribution. The SNOTEL network is comprised of over 800 sites in 13 western U.S. states.

The sites are designed to function for an entire year, or more, unattended. They are powered by battery, which is recharged from solar panels at the site.  Some of the data collected include snow depth, diurnal temperature readings as well as averages, all-season precipitation amounts, soil moisture content, and soil temperature.

Some of the more advanced sites are even equipped with instruments that collect wind speed/direction, relative humidity, and solar radiation amounts. Every site is configured with a “snow pillow” which measures the amount of water in the snow based on the pressure exerted by the snow. Data is collected multiple times a day and some sites can report hourly or even in 15-minute increments. 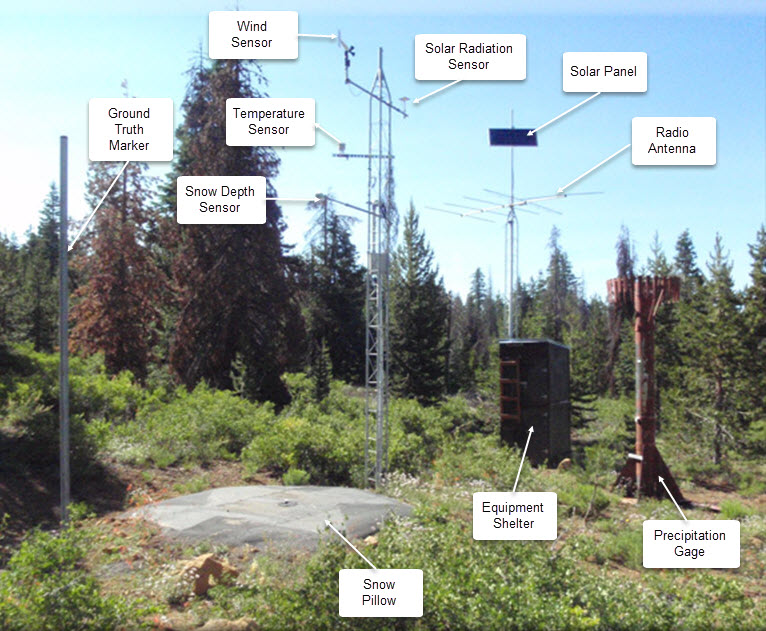 Perhaps the coolest part of the SNOTEL system is how it relays the data back. Remember, these sites are in very remote locations, high in the mountains, away from internet or data towers. SNOTEL sites use “meteor burst communication” technology to both receive and transmit information. VHF radio waves are sent at a precise angle which reflects off the always-present band of ionized meteors in the earth’s atmosphere, about 50-75 miles above the surface. No satellite systems are involved in the process. 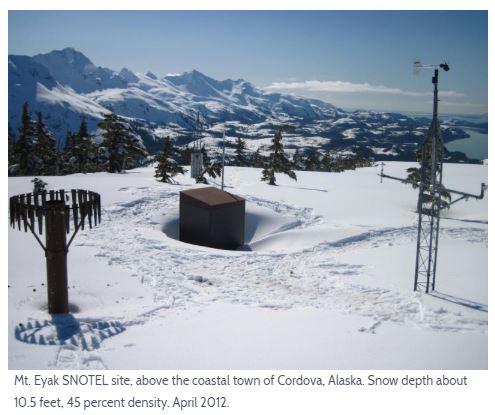 The data collection sites are located in Boise, ID and Ogden, UT. A central computer located in Portland, OR maintains the operations of the sites and is operated by the NWCC.

So, if you ever find yourself high in the western mountains and come across a weather data collection station, chances are, it’s a SNOTEL site! You can look at an interactive map of where the sites are located here: SNOTEL Interactive Map