A couple of weeks ago I wrote a blog post about the lack of tornadoes across “Tornado Alley” and the Southern Plains. That could all change within the next 24 hours. The Southern Plains, including central Oklahoma, are bracing for a significant severe weather event Monday with the potential for strong tornadoes, very large hail, damaging winds, and flooding. 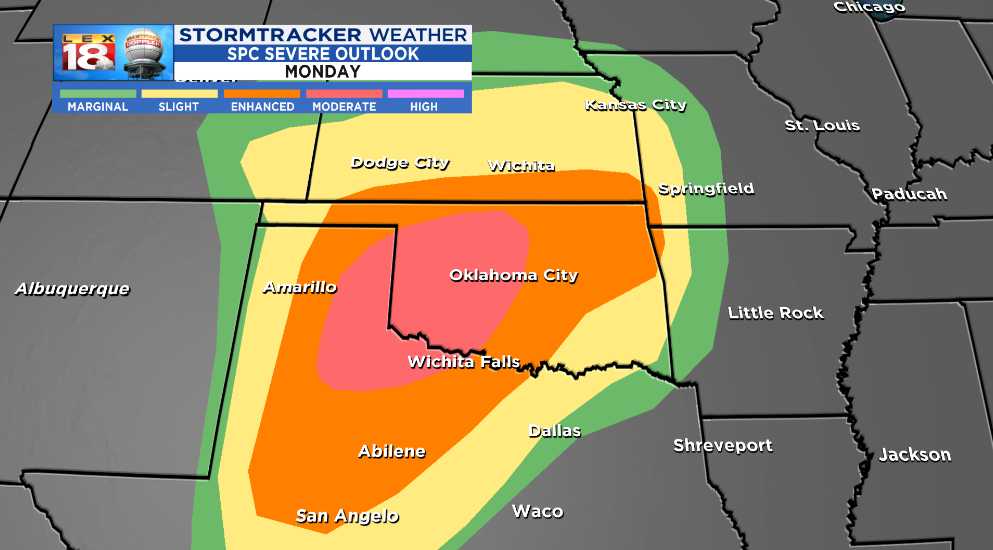 This part of the country is bracing for multiple rounds of severe thunderstorms between Monday morning and Tuesday morning. Widespread and significant severe storms are possible through early Monday afternoon as a warm front pushes north. The threats include up to baseball size hail and 80+ mph winds along with several tornadoes. The greatest risk for tornadoes will occur from northwest Texas into southwestern and central Oklahoma. The mode of severe weather will shift from supercells to a quasi-linear convective system Monday night; from individual cells to a line of thunderstorms. Damaging winds with embedded tornadoes will be possible during the overnight round.

Flooding will also become an issue as storms begin to “train,” or repeatedly track over the same areas. As unsettled, severe weather continues over the coming days additional flooding concerns will arise.

Oklahoma City Public Schools have cancelled all classes and activities in anticipation of this severe event.

This outbreak comes on the anniversary of the infamous EF-5 Moore, OK tornado from 2013. On that day a tornado outbreak occurred during the afternoon and evening with several tornadoes across central Oklahoma. The strongest touched down near Newcastle and traveled through Moore and south Oklahoma City. This tornado was given the maximum rating of EF-5. It caused catastrophic damage and claimed 24 lives. This was the last time an EF-5 tornado was recorded.