The wind damage following Wednesday’s severe thunderstorm was determined to have been caused by a downburst with winds of 70 to 80 mph. A roof was lifted off of a building and blow onto West Court Street. The debris struck a vehicle and sadly lead to a fatality. Glass was broken in multiple windows in the north side of the building. Roof damage also occurred to other nearby buildings. 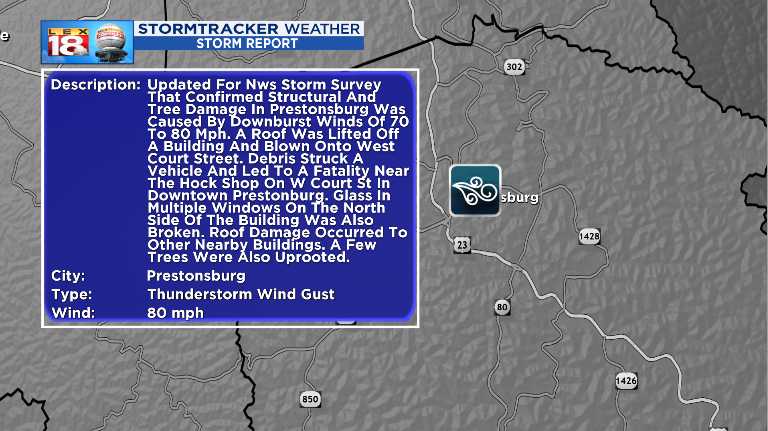 Even though this thunderstorm was destructive and winds were the equivalent of an EF-0, this damage was not caused by a tornado. It was straight-line winds; a downburst to be exact.

What is a downburst anyway? A downburst is an area of strong, downward moving winds rushing out of a thunderstorms. As the downdraft impacts the ground, the air is forced outwards in all directions. It can also curl back up like a rotor. Downbusts can produce straight-line wind damage over an area as small as one mile or as large as 250 miles. If a downburst spans a distance less than two and a half miles in diameter then it is considered a microburst. As we have seen time and time again, straight-line winds can be as damaging as a tornado.

There are some significant differences between downbursts and tornadoes. For one how they form. Tornadogensis begins with the interaction between the warm, moist updrafts and descending cooled, dry air within a thunderstorm. Rotation during this interaction results in the swirling vortex. Downbursts form when supercooled air within a thunderstorm rapidly sinks towards the ground, and then fans out in all directions after making impact.

Damage patterns are a key determining factor. Tornadic damage will show a swirl because of the rotating winds. Straight-line wind damage will be just that, in a straight line. It will look like the wind raked over an area.