Spring 2019 has seen another high water event on the Mississippi River. Abundant rainfall and snowmelt through the Plains and Midwest have caused water levels to rise to all-time highs which adds stress to the river levees. A flood control structure called the “Morganza Spillway” will help reduce some of that stress.

A majority of people who live in the United States have probably never heard of the Morganza Spillway, yet the impact it has on this country is paramount. It, along with a few other flood-control structures, is all that stands in the way of the Mississippi River changing its course, which could cause irrevocable economic and ecological impacts.

The flood-control structure, located in Morganza, Louisiana (river mile 280), separates the Mississippi River floodplain from the Morganza Floodway. The floodway is a levee-controlled area designed and designated to channel excess water from the Mississippi down to the Gulf of Mexico by way of the Atchafalaya River Basin during high water events. This, in turn, reduces pressure on the man-made Mississippi River levees that keep the river from changing course. 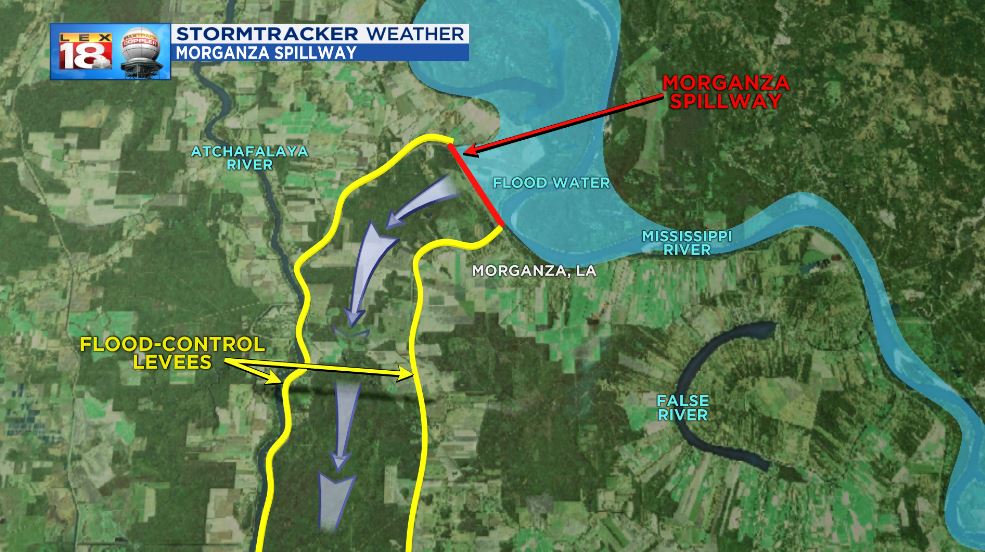 Following the great Mississippi flood of 1927 (the most destructive in history), Congress passed the Flood Control Act of 1928 which allowed the US Army Corps of Engineers (USACE) to construct several flood-control structures and floodways along the route of the Mississippi River. The Morganza Spillway was completed in 1954. It is 4,159 feet in length and is composed of 125 gated openings which, when combined with several other weirs and gates, can allow 600,000 cubic feet of water per second at its peak to be diverted from the Mississippi River. 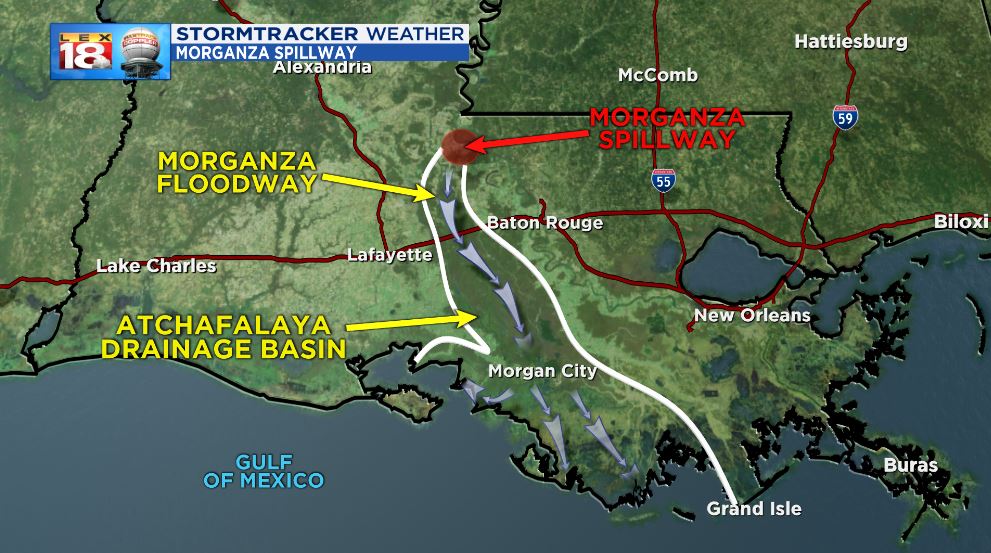 The reason why the Morganza Spillway is considered a last resort when deciding on flood control is because of the impact it has on the areas that it diverts water to. The Atchafalaya Basin, the largest wetland and swamp in the United States (260,000 acres), is inhabited by many people. Despite being an active flood zone, camps, houses, and businesses have been built in the floodway due to the rich resources of the area. These structures are prone to flooding when the spillway is open due to the rise in water levels.

In addition to human impact, many species of animals that call the floodway home are forced to flee the rising water and seek shelter in other parts of the state, which can lead to the introduction of invasive species, upsetting the delicate ecosystems of Southern Louisiana.

The USACE and several other agencies take careful consideration and planning before opening the spillway due to the impacts. However, the worst-case scenario is the Mississippi River changing course, therefore when the time comes, decisions are made. The spillway was set to open on June 2nd, but due to a slower projected crest, a soft opening is scheduled for Thursday, June 6th. After wildlife has had time to get to safety, more bays will be opened on Sunday, June 9th.

The Mississippi River has changed course many times in its history. Alluvial rivers transport and deposit sediment at their deltas. Over many years, the continued addition of sediment forces the river to find a quicker path to its intended destination. Historically, the Mississippi River has oscillated between the current channel and the Atchafalaya River but has also used other rivers and streams to connect to the Gulf of Mexico.

As man-made levees began to control the path of the river, control structures were also created to dispense excess water in an effort to prevent the Mississippi from changing course again. If it did, major port cities like Baton Rouge and New Orleans would completely lose their ability to river trade causing major economic impacts. The lower flow of the Mississippi in these locations would cause backwater flow allowing more salt water from the Gulf of Mexico to intrude into the freshwater reservoirs that hold drinking water for millions of residents in lower Louisiana. In addition to the impacts along the Mississippi’s old course, the communities along the new course, such as Morgan City, Louisiana, would be in danger of mass flooding as the water levels would be significantly higher with the added flow from the Mississippi.