D-Day: The Weather Forecast that Changed the Course of History

The most important element of the D-Day invasion was something that General Dwight Eisenhower and the Allied forces couldn’t plan for… the weather. The attack was delayed by one day to June 6, 1944 because of the miserable weather. Thousands of soldiers and the success of years of detailed planning hinged on a team of Allied forecasters. This forecast turned out to be a pivotal moment in World War II and world history, and made it the most important forecast of all-time.

There was a narrow time frame for Allied troops to storm the beaches at Normandy, France to take advantage of the moon and tide. Darkness was needed for the airborne troops, but the boots on the ground also needed some moonlight. There would be a full moon on June 6th. General Eisenhower wanted to take advantage of the spring low tide to ensure a low sea level to avoid land mines. June 5th was tentatively selected for the invasion.

The Normandy landings also required optimal weather conditions. Eisenhower didn’t want any uncertainty for this assault. High winds and rough seas could capsize vessels, wet weather would bog down those men storming the beaches, and thick cloud cover and fog would obscure the air support.

Modern weather forecasting was in the very early stages during the World War II era. The first satellite images from TIROS would not be seen until April 1, 1960. Reliable computer forecast models were still decades away. And radar was used primarily for military purposes. Meteorologists from the British Royal Navy, the British Meteorological Office, and the U.S. Strategic and Tactical Air Force used a network of observation stations across the western European continent and ensembles to predict the fickle weather across the English Channel. 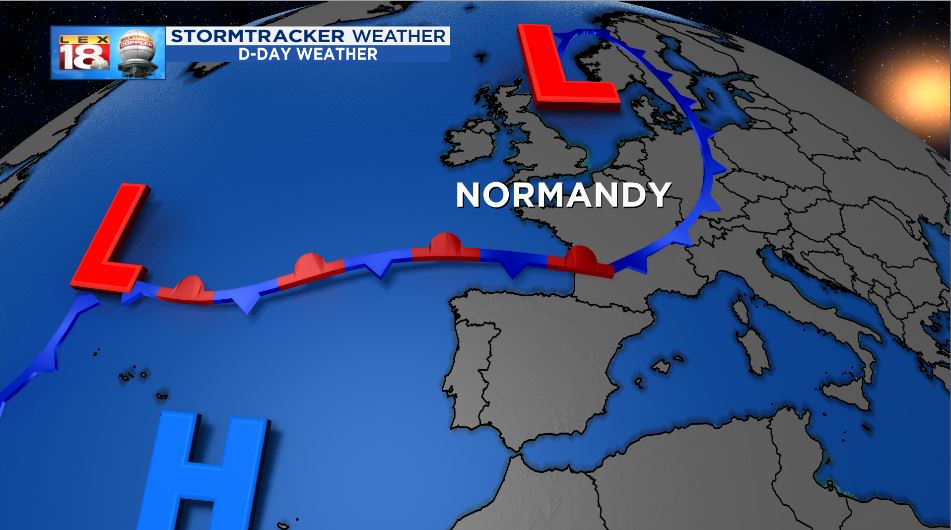 By June 3rd the forecast was becoming highly unfavorable for a June 5th invasion. High pressure was positioned over Greenland and the Azores with a low moving across the Atlantic. High winds and seas along with a low ceiling (base cloud deck) ruled out the planned invasion date.

German forecasters also predicted rough conditions. They believed that the gales and rough seas were unlikely to weaken until mid-June. With this news many high ranging commanders retreated from the front line and even went as far as returning home to Germany.

On the days leading up to the siege there was some disagreements among the Allied forecast teams. American meteorologists relied on a different forecasting method and believed that the high over the Azores would deflect the advancing storm. The Channel would be clear and sunny for the scheduled June 5th invasion. Meanwhile, the British predicted the stormy weather would persist. It was ultimately Captain James Stagg of the British Royal Air Force who advised General Eisenhower to postpone the invasion.

June 5, 1944 came and indeed the weather was miserable. The Allied were cooped up hoping that conditions would improve. The conditions on June 6th were more tolerable, but not ideal. Westerly winds gusted between 15 and 20 knots (17-23 mph) with five to six foot waves. Visibility was reduced as low-level clouds covered almost half of the sky over the English Channel, and became denser farther inland. On top of the overcast aviators battled mist mixed with smoke and dust.

The incoming storm ended up slowing down and moved to the north-northeast just off the coast of Greenland. This was key to clearing up some of the nasty weather. If the low had tracked eastward, the miserable conditions would have prevailed and the Allies would have missed this window of opportunity. The only other option would have come two weeks later. Winston Churchill described that future system as the “worst channel storm in 40 years.”

Years later during President Kennedy’s inauguration he asked President Eisenhower why the Normandy invasion was so successful. Eisenhower responded, “because we had better meteorologists than the Germans!”