Friday’s night’s mesoscale convective system rolled in with heavy rain, strong wind, and hail. Along with the usual threats, came a couple of tornadoes embedded in straight-line wind gusts that caused minor damage in Simpson and Allen Counties. Two weak tornadoes were confirmed after survey teams were deployed through the day on Saturday. 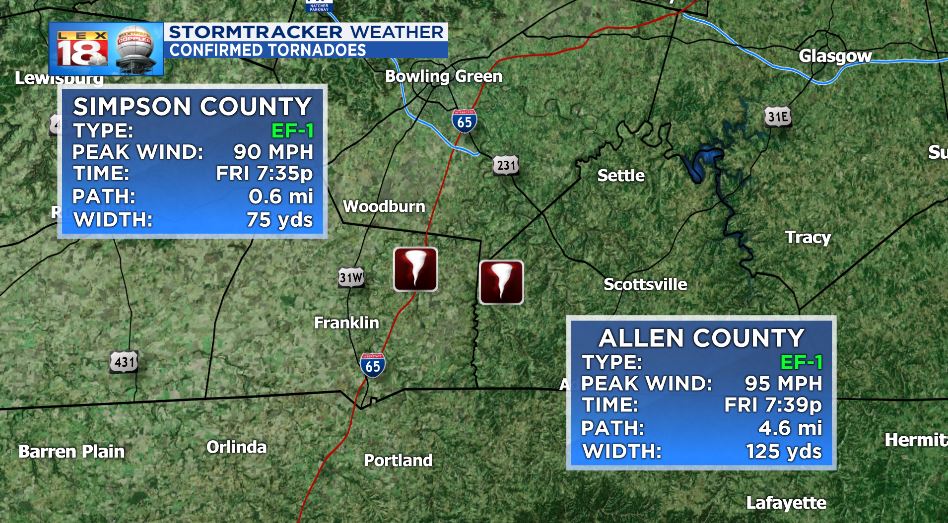 The first confirmed tornado to occur was a short-lived EF-1 that touched down in northeast Simpson County. The tornado was embedded inside of straight-line winds which caused extensive damage to trees along Salem Road. Evidence also shows that the tornado touched down around I-65 just a few miles south of the Warren/Simpson county line. The path of the tornado was a little over a half-mile long and peak winds reached 90 mph. There were no deaths or injuries reported with this tornado.

The National Weather Service Officials that surveyed the damage issued this damage report:

“Brief EF1 tornado touched down near I-65. The survey crew found a mixture of straight-line winds and a small area of a tornado embedded within. The tornado hit the Salem Rd area hard with extensive tree damage. A wheat field had distinct circulations quite visible.” 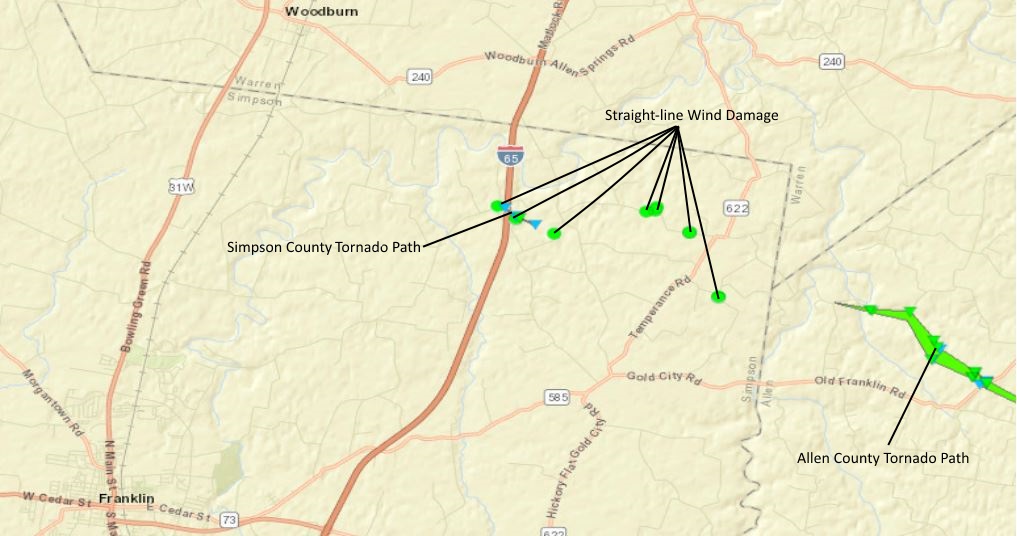 The tornado that spawned in Allen county was a little stronger than the Simpson county spin-up but is still considered a middle-strength EF-1. The path width and length were longer coming in at 125 yds and 4.6 miles, respectively. The tornado touched down about four minutes after the Simpson County storm. The damage on the ground was primarily tree and power line damage in the path. Damage also indicates that there may have been more than one tornado spawned due to cyclonic damage in several directions at times. Some barn and roof damage was also reported, including a barn that was uplifted and removed from its foundation.

The National Weather Service Officials that surveyed the damage issued this damage report:

The tornado touched down near the Horseshoe Ford Road and Horseshoe Bend Road intersection. There were numerous large hardwood trees split, twisted, and uprooted facing from northerly to southeasterly. Horseshoe Bend Road was closed due to trees down across the road and from flooding. Winds in this area were estimated to be between 90 and 95 mph. Further east along Mayhew Road a large, well-built barn
was uplifted and removed from its foundation with several cedar and maple trees twisted and snapped. Across a farmer’s field, corn was flattened and twisted in multiple directions. Large, heavy fuel tanks were rolled in two different directions on Mayhew Road. Several barns and outbuilding had roof damage as well.

At the Mayhew and Pope Road intersection there was extensive softwood and hardwood tree damage, especially around the Harmony Missionary Baptist Church at 5226 Pope Road. Residents said there was a major pressure change with the tornado.

There were indications there may have been more than one tornado as tree positions would go from a tornadic circulation of northeasterly to southeasterly direction and then to all straight-line wind damage in an easterly wind direction, then back to a tornadic circulation in multiple directions. Radar supports this ground analysis with
mesovortices along the leading edge of the potent squall line. The width of the individual circulations varied between 75 and 125 yards with widespread straight-line wind damage all around.  Most of the
wind damage was between 85 and 95 mph.