The 25th anniversary of the West Jessamine tornado 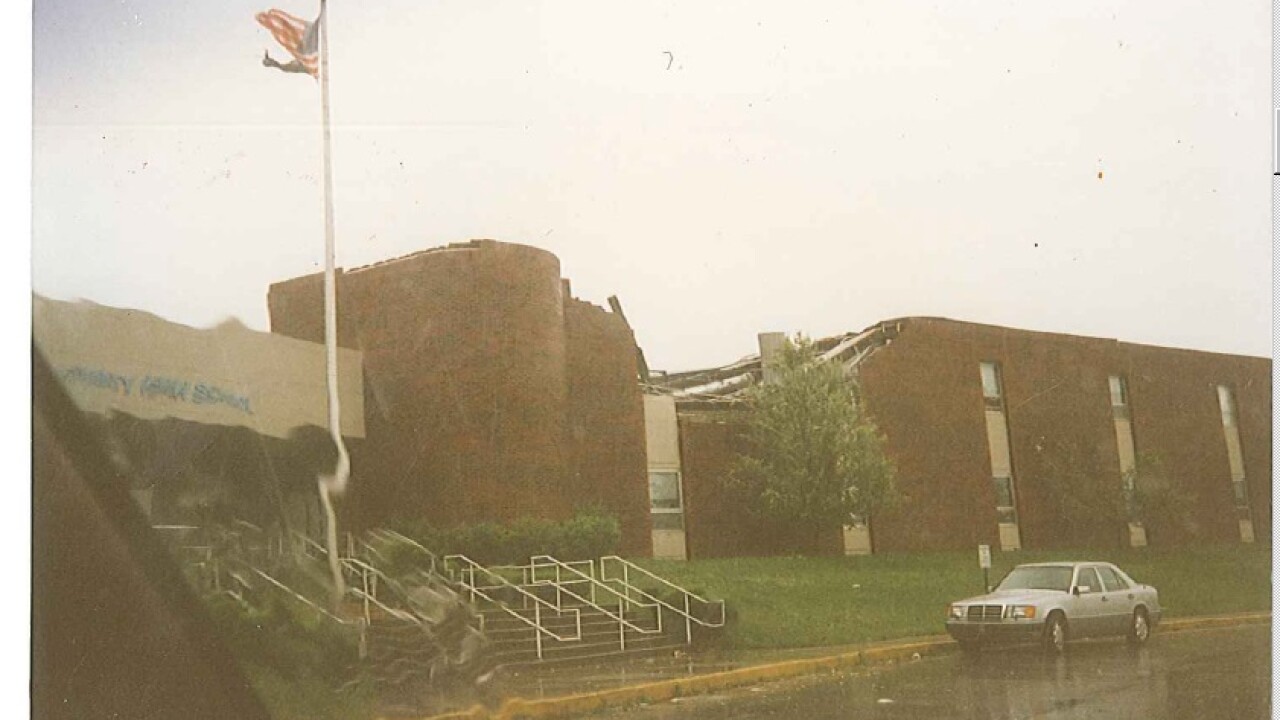 For 22 years it wasn't considered a tornado. But ask John Gordon, the meteorologist in charge at the National Weather Service in Louisville, and he'll tell you that residents in Jessamine County always knew that it was more than just straight-line winds that damaged West Jessamine High School and the surrounding area. Folks would hound him year after year during storm spotting trainings and other emergency management meetings. John took up the challenge and put on his forensic meteorologist hat a few years ago. The result was in 2017 the NWS re-classified this event to a F2 tornado. Monday, May 18th the 25th anniversary of the West Jessamine tornado.

Here's the setup. It was the morning of May 18, 1995 and the atmosphere was already primed for severe weather. Around 7 AM a line of strong storms entered Anderson and Washington counties. The line would move in Mercer, Woodford, Jessamine, and Fayette counties over the course of the next hour. “Line breaks” and cyclonic circulations were detected as the thunderstorms arrived in Jessamine County. These circulations are signs that enhanced straight-line wind damage and/or tornadoes are possible. The displays above are the reflectivity and velocity scans centered on Jessamine County around 7:35 AM. Notice the tight coupling of reds and greens on the velocity - there was rotation within that thunderstorm as it tracked near West Jessamine High School.

The way damage surveys are conducted and the rating system for tornadoes has significantly changed. 25 years ago meteorologists were still using the F-Scale. Now the EF-Scale is used and it incorporates damage indicators such as building type, structures, and trees. The F-Scale did not. There were likely other factors that led the meteorologists to the conclusion that they made in 1995.

Upon review 20 some years late, this event was officially re-classfied from a straight-line event wind to a F2 tornado by the National Weather Service. The tornado had maximum winds of 145 mph along its 24 mile path that covered four counties. Extensive damage was done to West Jessamine High School and surrounding buildings. All told there was $2 million in damage. The school's roof was lifted, 11 buses were significantly damaged, and there was also damage to tobacco barns and a greenhouse on the school's grounds. More than 30 students were injured. The Nicholasville Walmart and the nearby strip mall also sustained significant damage. The tornado weakened to a F1 with winds of 100 mph as it crossed into southern Fayette County. This thunderstorm left behind a path of wind damage to the West Virginia state line.

There was another tornado that morning. Moments earlier Salvisa was hit the hardest by a tornado. At the time there was limited information on this event. The NWS case study determined that the tornado began near Mayo in northern Mercer County. There was consistent high F1 to low F2 damage across Mercer and southern Woodford counties. The most significant damage was along US-127 in Salvisa, where barns and outbuildings received extensive damage, other roofs were pulled apart, and cars were blown off of the highway. The tornado lifted near Nonesuch after traveling 10 miles at 45 mph.