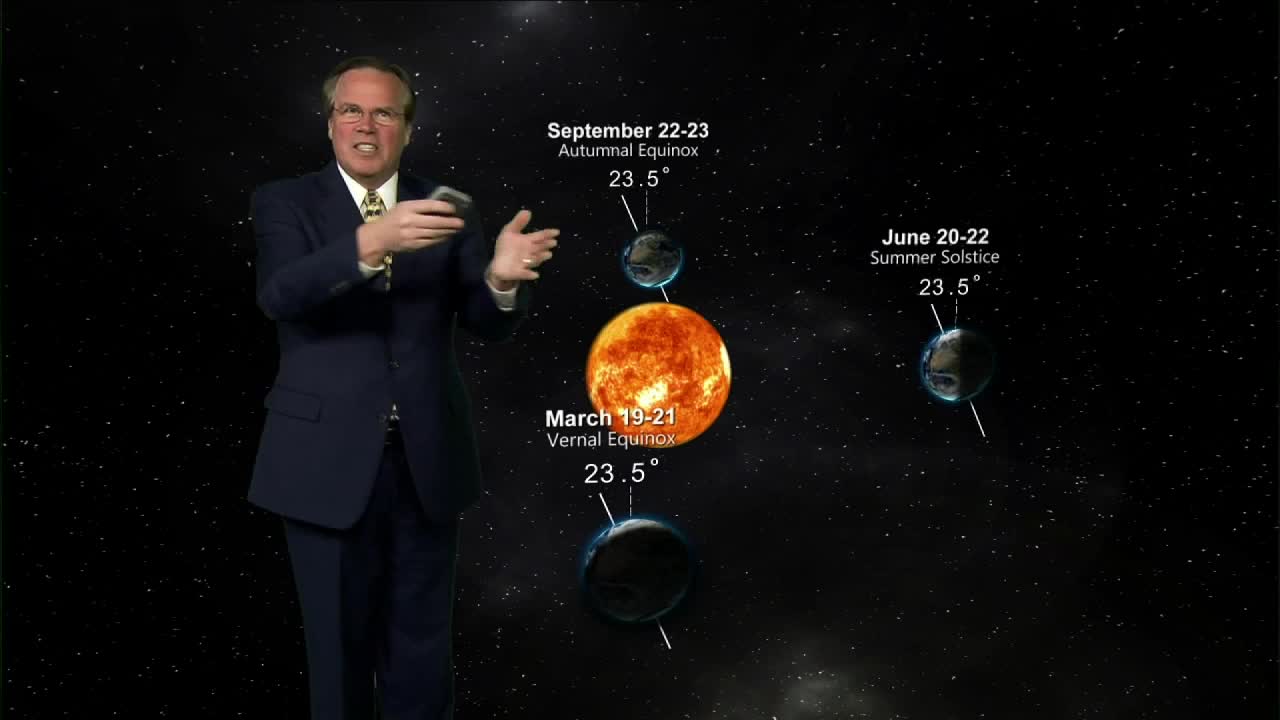 What is the Vernal Equinox?

The vernal equinox occurs Thursday March 19th at 11:50 pm our time when the Sun will be directly over the equator. This is official and true beginning of the spring season.

Meteorologically we speak of spring beginning on March 1 and lasting until May 31. It’s merely a bookkeeping tool for us which makes it easier to track seasonal climatology since the days are hard and fast. The equinoxes and the solstices can vary by a couple of days making looks back into history more difficult.

But for centuries spring began with, and still does, with the Vernal Equinox. So, let’s first look at the words to get their meaning. Why not the ‘Spring Equinox’. We could do that, but like many things the origin of vernal is Latin. Ver is Latin for spring, so vernal is an adjective for spring. Equinox also has Latin roots with Equi being equal and Nox being night or darkness…equal night. It’s the day worldwide of equal parts day and night.
Now if you’ve been looking at our sunrise and sunset on our daily forecast pages on LEX 18 NEWS you’ll see the sunrise and set are not at equal times. That actually occurred for us earlier in the week. It has to do with how we compute sunrises and sets. For the sunrise it’s when the first limb of the Sun crosses the horizon. For the sunset, it’s when the last of the solar disk is visible. It’s the size of the Sun and the time it takes for it to completely cross the horizon that makes the difference. If we used the midpoint of the Sun crossing the horizon, then the rise and set times would be the same on the equinox, but we don’t, so they’re not.

What’s also interesting is that if you were able to see the sunrise or set and you were on a due east/west road, you could watch the sunrise/set directly on that road. Starting after the equinox the sun will rise/set slightly farther north of the road each day until the solstice in June.

As you’ll see in the video lesson, why we have seasons is dictated by the tilt of the Earth’s axis, which is inclined 23.5 degrees, but always (for now…it does change on huge levels of time which we may cover in a later lesson) pointing toward Polaris (the North Star). On the extremes, the solstices, because of that tilt we’re either pointing toward the Sun (summer) or away (winter). On the 2 equinoxes, the tilt doesn’t matter with relation to the Sun, it’s shining equally north and south.

Of course, there’s the old wives’ tale of being able to stand an egg upright only at the time of the equinox because of the gravitational pull being equal. In truth, you can do it anytime you want with a steady hand, but it’s still fun to talk about.

By the way, our daylight hours continue to increase and we’re gaining just under 2 ½ minutes per day and will do so for a little while longer. As we pull away from the equinox and head toward the solstice the rate of lengthening will begin to decrease until it’s essentially zero at the summer solstice in June. Then we go back the other way. We’ve gained about 2 ½ hours since the winter solstice in December and have a bit more than 2 ½ hours to go when summer starts.