'Didn't know if we'd make it out': Tornado touches down in Goshen, Ohio

Power expected to be out for days

On Wednesday, Pegram declared a state of emergency for Goshen Township.

A preliminary National Weather Service survey Thursday declared the tornado was an EF2 tornado. EF0 is the mildest ruling and EF5 is the most severe. EF2 tornadoes contain 111 to 135 mph winds.

An EF2 tornado was on the ground around 2:30 p.m., according to Doppler radar. Two people were injured as a result of the storm, though Pegram said there are no serious injuries.

“At this time, only two confirmed injuries — that’s a blessing," Pegram said. "One was a firefighter injured by a chainsaw, transported to a hospital likely for stitches. One was a citizen, injured by falling debris — conscious, alert.”

Around 150 to 200 known structures have been damaged by the tornado, and further damage assessment is being done all of Thursday. Pegram also expects the power to be out in Goshen for days.

Significant storm damage could be seen near the intersection of OH-28 and Dick Flynn Road. Pegram said there has been extensive damage to the fire and police departments. Video and photos from the scene show the fire station is partially collapsed.

The extensive damage caused issues for first responders coordinating responses. Crews were able to get their equipment out of the building. There was also a five-hour long gas leak at the fire station that Duke Energy worked to fix. Pegram said there will need to be significant restoration to that fire station.

Other buildings in the area, including one that houses an Allstate Insurance branch, had their roofs torn off. A building that houses Bick's Driving School was also destroyed.

Eric Beavers and employees inside the Allstate agency had about 10 seconds to run for cover as the tornado touched down.

"It's a miracle that I'm talking to you," Beavers said. "Said we gotta go ... before we made it, the ceiling crashed down on us. We ran, tried to dive down under the table, four or five of us. The ceiling collapsed in the kitchen on top of us. The walls blew out. We were under the table calling our kids, seeing if they're OK, telling them we loved them ... didn't know if we'd make it out."

After 10 minutes, they were able to make their way out of the building. 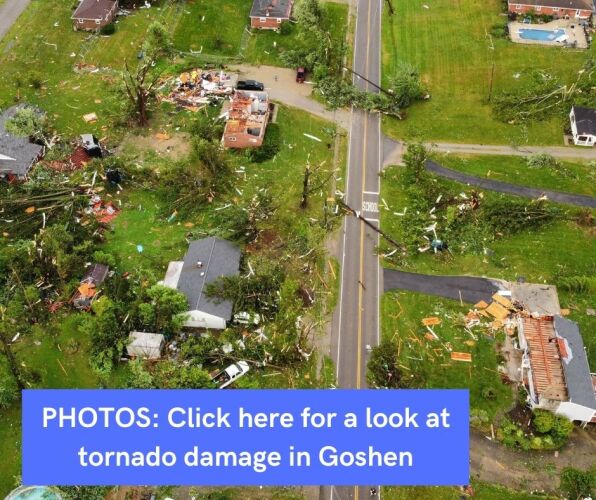 Terry Casey, owner of Goshen Grind, said he is grateful his staff is OK after the storm.

"This came in fast — and visibility, you couldn't see 10 feet. The rain was coming down so hard — the wind," Casey said. "Things from our front porch actually went around the building, and 50 feet into the woods."

Casey said their focus will be on helping others in any way they can.

"We donate our tips weekly to different causes, groups. I'm sure we'll have a lot of asks. We're happy to help," Casey said.

Firefighter describes what tornado in Goshen, Ohio was like

Crews will be working all night to clear damage and bring power back to people who live in the area. First responders went door-to-door, checking to ensure homeowners are OK.

The Red Cross is setting up a shelter at Goshen High School (6707 Goshen Road) for anyone impacted by the storm. People can bring their pets, though they will be kept in a separate area. Red Cross is providing food and water, as well as canteen services for first responders.

The tornado came while a line of strong storms was moving through the Tri-State, producing winds of more than 70 miles per hour and knocking out power to more than 100,000 homes in the region.

A Tornado Warning was in effect for the area and the surrounding counties of Clermont and Brown at the time.

Here is a look at the likely path of the tornado that pushed through Goshen Township. A few damage photos from @BarryFulmerWGDN (Drone Shot) & @JessicaHartTV from the Fire Department & Government Center. @WCPO #WCPO #CincyWX #OHwx #INwx #NKYwx pic.twitter.com/bHjLa2QmjR

Goshen tornado: Radar analysis of the EF2 tornado
Copyright 2022 Scripps Media, Inc. All rights reserved. This material may not be published, broadcast, rewritten, or redistributed.