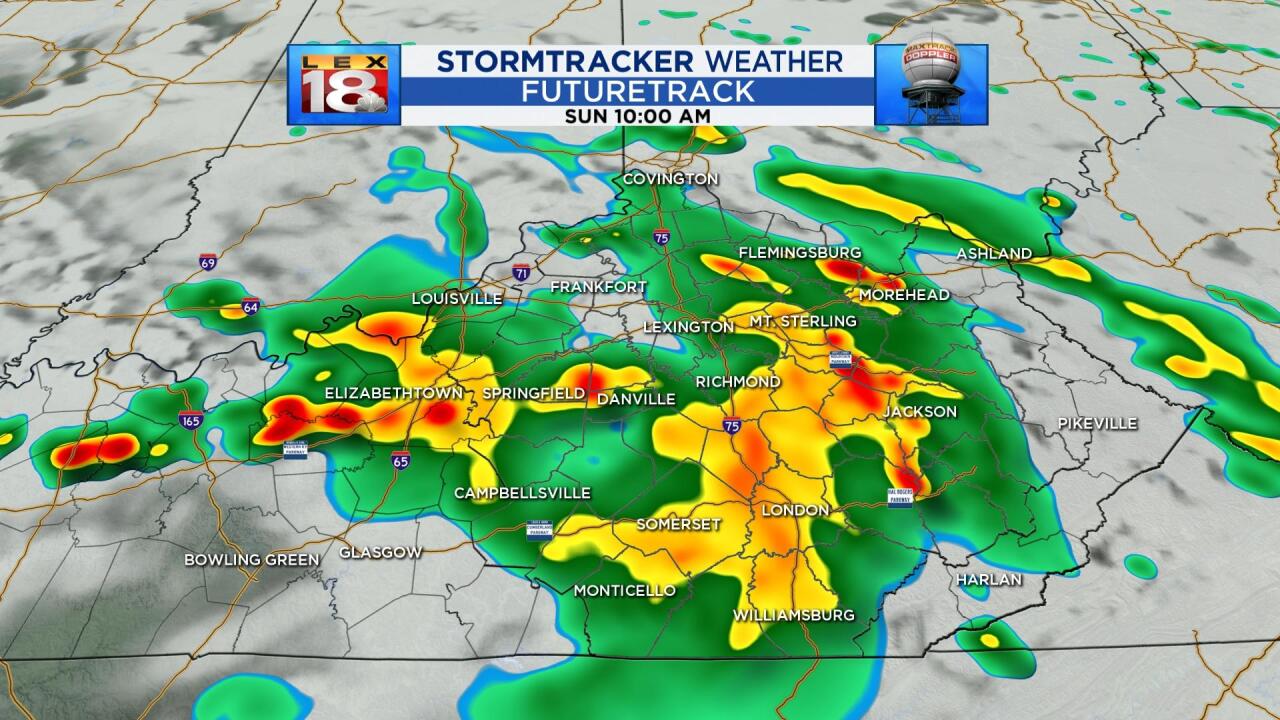 A slow-moving cold front will be the aggressor for storm activity for the better part of this week. Last night, waves of rain and thunderstorms flared thanks to the lower pressure and abundant moisture in the area. Sunday will be the worst of it as far as threats go. The, scattered waves will continue through the early part of the week, tapering as the front moves on around Wednesday.

We’ll be dealing with a plume of moisture riding out ahead of the front, which will drop heavy rain. The problem is that it wants to take it’s time. This moisture swath will line up over the south-central corridor between I-65 and I-75 for the late morning hours. Then, it will shift east through the early to middle afternoon, affecting the southeastern counties.

Rainfall amounts through this time frame could reach between 1.00 and 3.00 inches. Flash flooding could be a result from this feature. A FLASH FLOOD WATCH has been issued and will be in effect through Monday afternoon. This accounts for the morning and afternoon widespread rain, but also for round of thunderstorms this afternoon which could put down heavy rain on already saturated area.

Speaking of thunderstorms, by the middle afternoon, the widespread rain will have moved out. We will see some breaks in the cloud deck overhead which may look nice but will also aid in thunderstorm development and strengthening. Timing on the storms will run from the early afternoon through the evening hours.

Heavy rain and lightning are expected threats. If storms with heavy downpours move over already flooded areas from the morning rainfall, there could be another threat for flash flooding. The Storm Prediction Center has labeled the severe threat today as a “slight” risk, meaning a few storms are expected to push severe limits.

Damaging thunderstorm wind gusts will be the primary threat for today. Small to moderate hail is also possible, but large hail is unlikely. Due to the abundant rainfall this morning, soils will be saturated. Wind from storms will have the ability to take down trees and power lines which could lead to power outages. If you hear thunder, head indoors and wait out the storm.

Storms will continue to wind down overnight, but there will still be activity. Several waves of rain and thunderstorms will flow through the Ohio and Cumberland River Valleys through the early parts of the work week. As the cold front stalls, expect daily rain and storm chances. Timing on the waves will differ each day and will not necessarily hit in the afternoons.