Feeling the Effects of Florence

Florence is now a tropical depression with sustained winds near 35 mph and occasionally stronger gusts. Today, we will feel some of the effects of the storm. Despite the fact that the “center” of the storm is over 300 miles away, the wind and rain will still roll into Kentucky through the day today. As of now, things are mostly calm. Wind is only picking up slightly with occasional gusts. The radar shows a few light showers crossing the Cumberland Mountains.

As Florence inches closer to Kentucky today, rain and wind will start to pick up. We’re expecting moderate to heavy rain at times, and the bulk will reside east of Interstate 75. Expected rain amounts haven’t changed much. Counties east of I-75 will be in the 1” to 3” range with isolated amounts up to 4” possible. Along the I-75 corridor (Bluegrass included) rain amounts will total between a quarter of an inch up to an inch and a half. West of that, a few tenths to a half inch. Flash flooding is not expected on a widespread scale, however, high runoff totals mixed with saturated soil from previous rain will likely lead to fast rising water, especially in the deeper river valleys. Watch for water on roadways and remember to NEVER drive through a flooded roadway.

Wind will be a minor issue, but could still cause some problems to motorists through the next 48 hours. Wind speeds are still expected to be in the 15-25 mph range with gusts expected to reach 35-40 mph at times. This will make driving difficult for high profile vehicles on dry roads, and all vehicles on wet roads. Strong crosswinds are likely and can come from any direction as the wind orientation will change through the next two days.

Florence will make an exit Monday evening with only a few leftover showers Tuesday morning. After that, we dry out, warm up, and get some sun therapy for the middle of the work week. 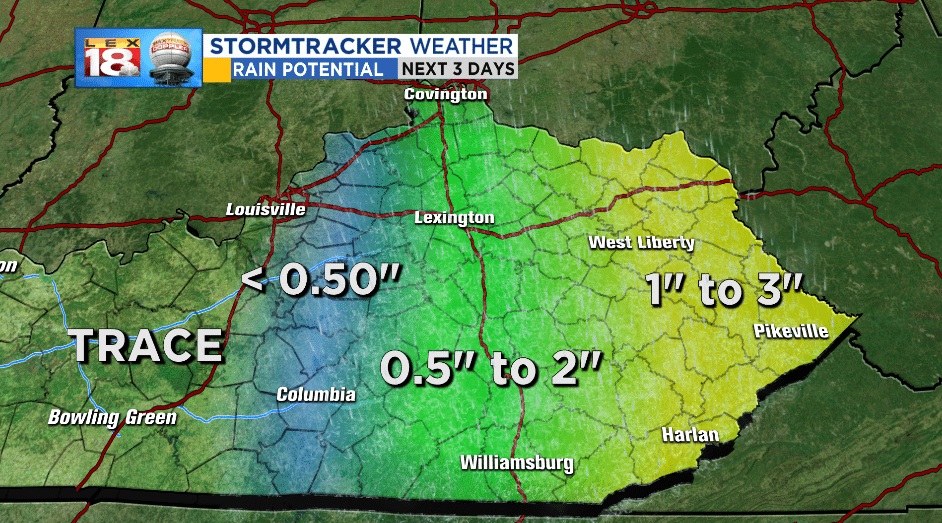