Not much has changed in the last 24 hours. In fact, not much has changed in the last 120 hours (5 days). Temperatures continue to run well above average, both morning and afternoon. We’re starting the days out (including today) with temperatures barely dropping into the 60s due to abundant humidity. Afternoons crank up into the 80s and we almost touched 90 degrees yesterday. Only a few stray showers are showing up on the MaxTrack Live Doppler. The only other precipitation expected this morning will be some drizzle in areas with patchy fog.

Skies will start mostly clear in areas sans fog. Those that have it will see the ground clouds lift as the sun rises. Eventually skies will clear for everyone and the heating begins again. Today will be another “rinse and repeat” day as we’re heading to the upper 80s for highs. Clouds will build from the heat, but the chance for a stray shower or t-shower is even less today thanks to stronger high pressure in the region. So, most everyone stays dry today, but if you’re one of those in the 10% that get a shower, it will be a brief but heavy downpour with a few possible lightning strikes. We’ll have another day like this tomorrow, and then the changes begin. Starting Wednesday, the evidence of the cold front will arrive. Clouds increase through the day, and winds pick up in strength. Rain and thunderstorms will move in by the evening for Central Kentucky and then spread east through Thursday morning. Heavy rain, and strong thunderstorms can be expected as the frontal boundary passes Thursday. After it does, the bottom drops out, and fall arrives in spectacular fashion. We’re dropping from the 80s to the 60s in a little over 24 hours. The cool down continues through the weekend and we will struggle to break 60 for afternoon highs starting Saturday. Jacket weather incoming. 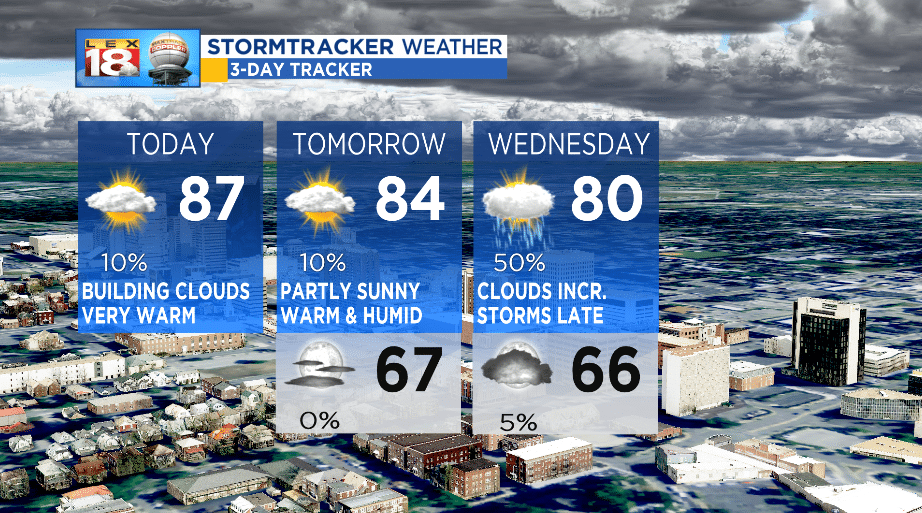