As of now, things are quiet in the state with partly cloudy skies and cold conditions. This would be labeled as the “calm” before the winter storm headed into the Tennessee River Valley tomorrow. Clouds will increase through the day, and because of it, temperatures will struggle to reach the upper 30s.

We’re tracking a winter storm that will bring a lot to some, and a little to others. Kentucky is on the split line where some counties will stay completely dry while others have to deal with a variety of precipitation types. Tonight, a few rain or wintry mix showers are possible in the extreme southern portions of the state. The main timing of precipitation isn’t until Sunday morning. That’s when rain, freezing rain, and sleet are expected to move across the KY/TN state line. Snow will only be sprinkled in at this point. So most in the southern counties will see rain or a wintry mix first. As colder air advects into the region, rain will change over to snow for areas in the southeastern counties. Snow will be heavy at times. Amounts will range from a few tenths of an inch around the Mountain Parkway to 2” to 4” possible in the Cumberland Mountains. A WINTER WEATHER ADVISORY will begin tonight at 8 pm and last through Sunday at 4 pm. Counties included in the advisory are mainly along the TN and VA state lines. Localized higher amounts could be collected above 2,000′ of elevation.

Most of the precipitation moves out Monday, but residual showers will continue to drop a winter mix for the south and southeastern counties. Travel impacts will be seen most along I-75 from Rockcastle, south. The Hal Rogers and Cumberland Parkways, and any highways east of I-75 and south of the Mountain Parkway. Use caution through Monday afternoon if driving these roads. 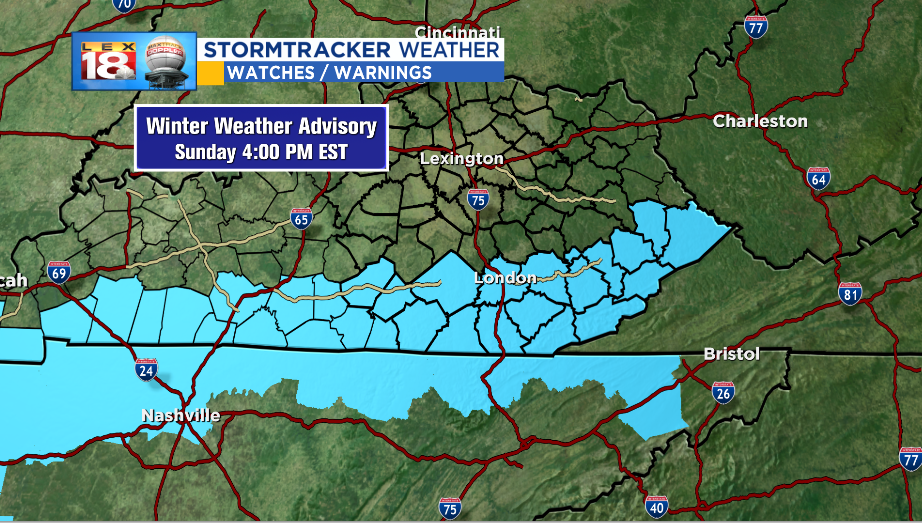