All four major precipitation types can be found on the radar early this morning. Cold rain, freezing rain, sleet, and snow are rampant across Southern and Southeast Kentucky counties. Road conditions continue to deteriorate as the precipitation either blankets the roads or creates a light sheen of ice. Temperatures are running at freezing or below with “warmer” areas being further south. If you’re not getting any precipitation (I-64 & north) skies are partly cloudy.

Winter precipitation will continue to fall through the day in counties that already have it falling. The storm will clip us to the south, so I don’t expect the precipitation to move much further north. Highest road impacts will be in southeastern county mountains. Above 1,500′ snow could total between 3” and 6.” The highest peaks in the southeast (mainly along KY/VA line) could see as high as 8” to 10.” Valleys in southern counties will top out in the 1” to 4” range. Locations in the Kentucky mid-section and southern counties are still on track to receive 1” to 2” of snow. However, freezing rain is more likely in these locations. Ice amounts up to 0.15” are possible creating hazardous road conditions. Roads will be slippery for anyone south of the Bluegrass and Mountain Parkways through the entire day. All precipitation will begin to exit tonight and skies will clear. Temperatures drop a bit and we’ll start cold for Monday. Road conditions will begin to improve Monday during sunlight hours as temperatures rise under mostly sunny skies.

The WINTER STORM WARNING continues through 7:00 PM EST for Bell, Clay, Floyd, Harlan, Knott, Knox, Leslie, Letcher, McCreary, Perry, Pike, and Whitley Counties. Valleys in these areas will recieve 1″ to 4″ of snow. Higher elevations above 1,000 feet will collect between 3″ to up to 10″ of snow. Highest amounts will accumulate on higher elevations such as Pine Mountain and the KY/VA state line. 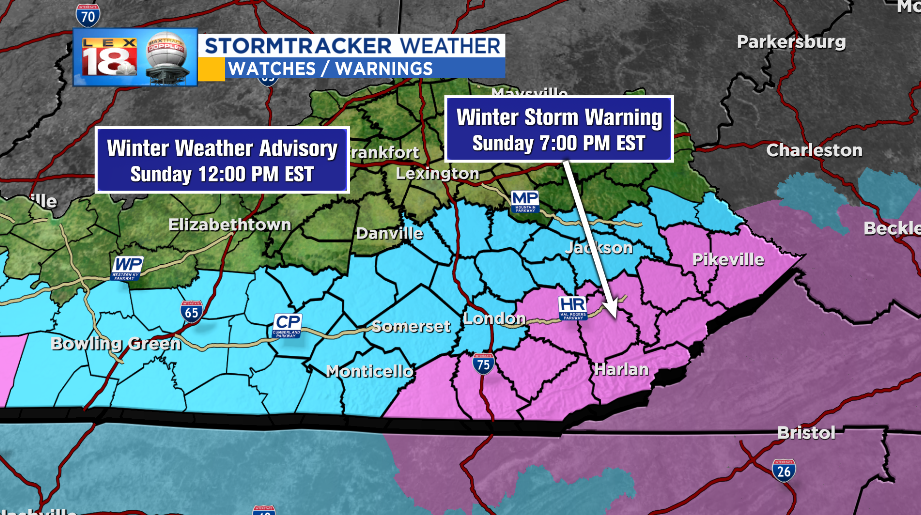 The WINTER WEATHER ADVISORY continues until noon Sunday for Adair, Breathitt, Casey, Estill, Garrard, Jackson, Johnson, Laurel, Lee, Lincoln, Madison, Martin, Magoffin, Owsley, Pulaski, Rockcastle, Russell, Wayne, and Wolfe Counties. These locations will have a rain/snow mix through the day or snow. Ice accumulations are possible up to 0.15″ and snow amounts will range from a few tenths to up to 2.”

The Threat Index is split between areas under the Winter Storm Warning (Threat Level 2) and the Winter Weather Advisory (Threat Level 1). All areas north and northeast of that will stay mainly dry and will have minor, or no impacts. 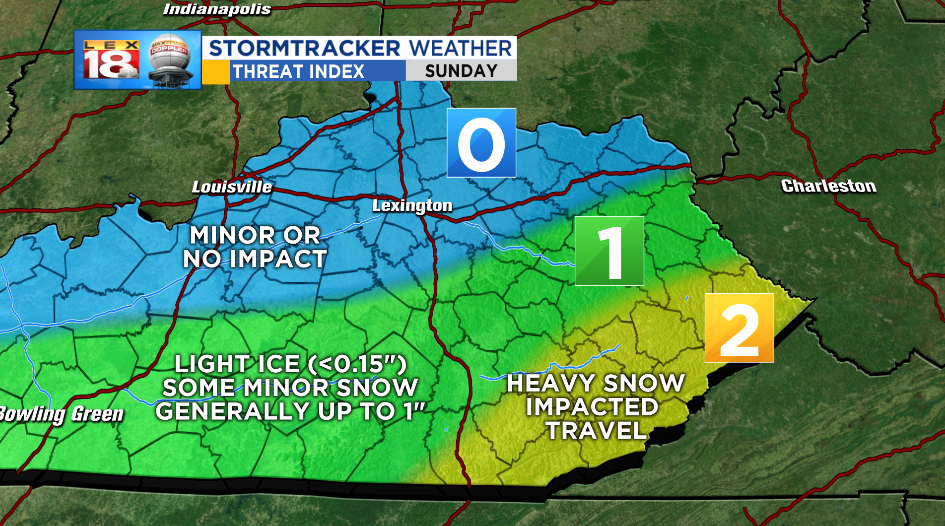