In the grand scheme of things, there’s not a lot happening this weekend in weather. Sure, it’s cold and cloudy and we have the occasional chance for rain and snow, but overall it’s going to be calm. As of now, we’re looking at a semi-cloudy morning. You can see the moon and brightest stars through the haze of the cirrus overhead. A few flurries to light snow showers are falling in Central Kentucky. Amounts will be negligible from this. Still, slick spots are possible, so be careful on roads this morning.

We’re seeing some light snow accumulations from the snow showers passing over the central and eastern parts of Kentucky this morning. This is a quick-hitting snow system and will continue to push east through the morning. Amounts will be nothing more than a light dusting, but roads have a chance to become slippery due to the melting and refreezing. Another small chance for snow and rain arrives tomorrow. Early tomorrow morning, another low will slide into the Great Lakes Region and the training cold front will allow a mix of rain and snow as temperatures hover around the freezing mark. This will also be a brief hit and will finish before we hit the late morning. Still, some minor snow amounts are possible and may cause slick spots on roads. Snow amounts will range from a dusting south of I-64 to a few tenths north of the interstate through the weekend. A big cold snap and more snow is expected next week. 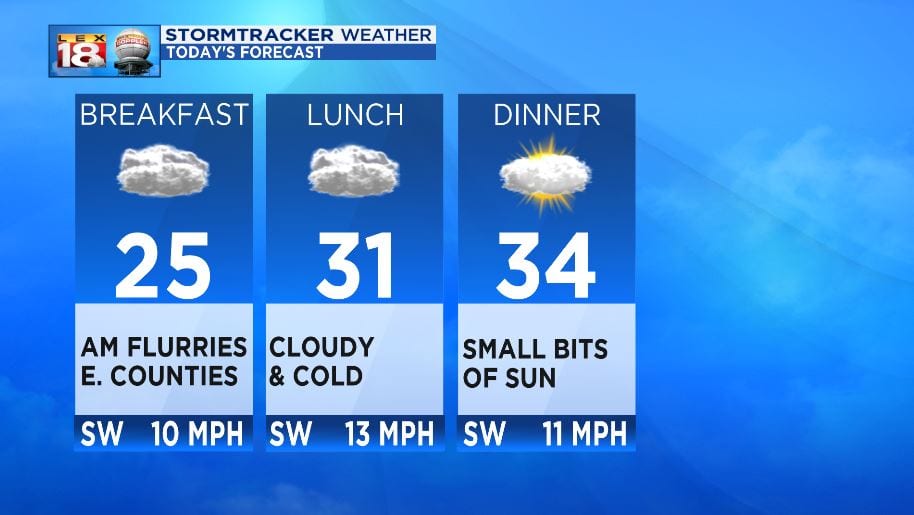