We’re wrapping up the cold and somewhat messy weekend with a few light rain or mix showers. Temperatures at the surface are mainly above freezing this morning which will melt any wintry precipitation that falls. Otherwise, it’s cloudy and cold. 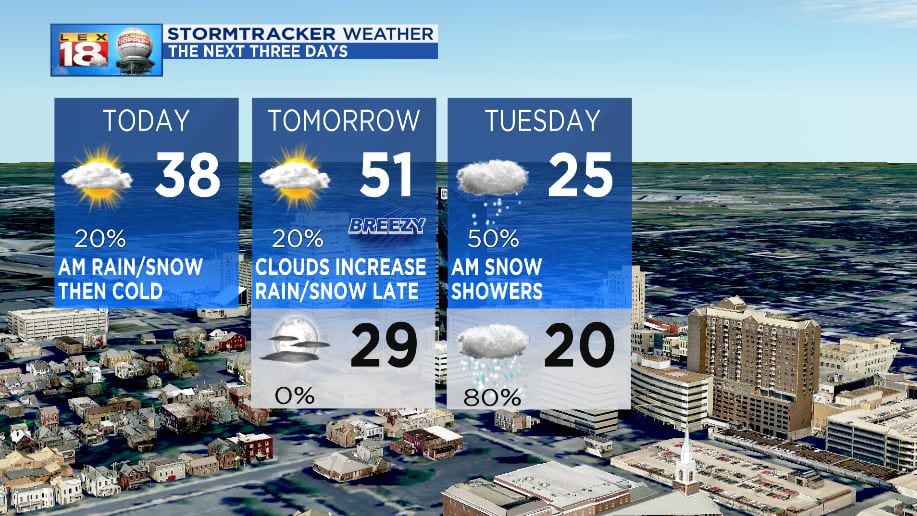 As we move into the daylight hours, cloud coverage will begin to thin out, especially into the afternoon. Some bits of sun will be seen and mostly clear skies overnight will allow for another cool down into the 20s for morning lows Monday. Clouds increase quickly due to the incoming winter storm that is shaping up to bring snow back to the Commonwealth. A breezy and mild day is expected Monday as a southwesterly wind shift boosts temperatures into the 50s. However, the crash is not far behind. Rain will move in late Monday night and begin to transition over to snow as temperatures fall to freezing and below around midnight. Snow showers will continue through Tuesday morning and a few inches of accumulation are possible. As of now, we’re looking at a general 1” to 3” for the Bluegrass and a 2” to 4” accumulation for Southern and Eastern Counties. These numbers could change, but be aware that the morning commute will be impacted Tuesday morning, regardless. After that, a cold snap begins with a rapid and sustained drop in temperatures. There will be a few quick-hits of snow possible each day with minor accumulations, until we reach the weekend and get another warm up.  ​

More information on the early-week winter storm can be found here: One Storm Will Bring Big Changes