The first batch of heavy showers is through most of the state with only a few clusters of moderate to heavy rain still present in the southeast. Otherwise, we’re cloudy and mild, with a small break. Temperatures have remain in the low to mid-60s most of today as we continue to sit on the warm side of the stalled frontal boundary. More rain is on the way, including thunderstorms which can be strong at times.

Warm, cloudy, and wet continues the weather trend for today and tomorrow. Rain showers were widespread and heavy this morning, and have turned scattered with the largest clusters in the southeastern counties. While it may seem like we’re finished, we still have a ways to go with not only heavy rain, but thunderstorms as well. A warm front will lift north, overnight bringing back another round of heavy rain and storms. Later into Thursday, the subsequent cold front will pass ramping up the rain, and storms. Due to strong surface winds, thunderstorm winds could become strong at times. The potential for severe wind gusts is low, but still possible, especially tonight. Rain and the potential for flooding will be the more serious threat as another few inches are expected to fall between now and Friday morning. Most locations in Kentucky will fall in the 1” to 3” range of rainfall. Some spots along the Ohio and northern Bluegrass may collect up to 4” of rainfall before Friday morning. Watch for high water. A FLOOD WATCH will be in effect until Friday at 1:00 am. Rain will end early Friday and a few flakes are possible, especially east of I-75. Accumulations of snow are not expected. 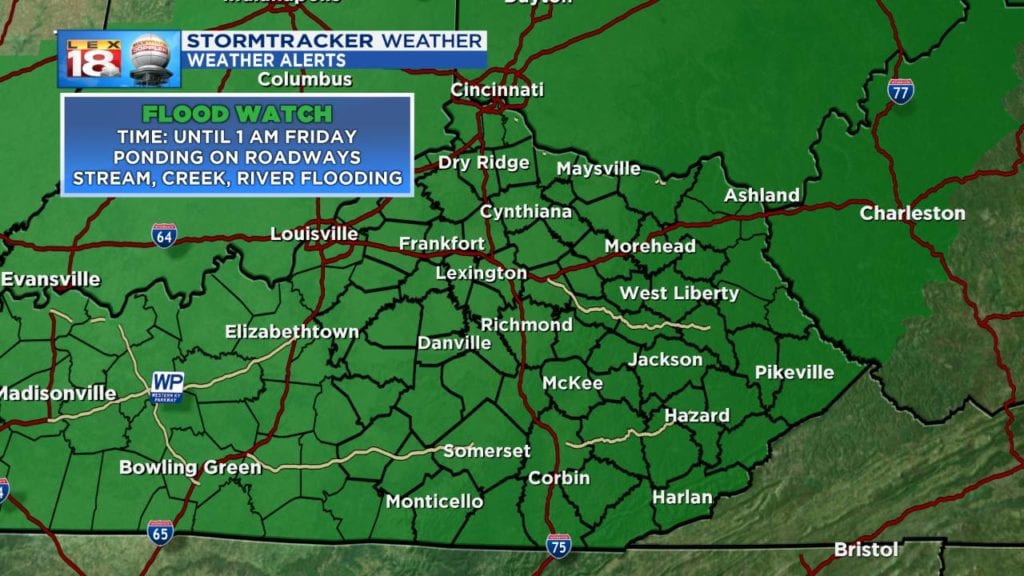