Once the rain and storms left last night, things calmed quickly. It’s a quiet start to Memorial Day but we still have some issues to discuss. Thanks to the added moisture in the air from the rain showers, fog has settled in the region. Some of the fog is thick and visibility could lower to less than a quarter of a mile. Low visibility along with wet roads from last night’s rain could make things hazardous on the roads this morning. Use caution if venturing out.   Nasty storms rolled through the Bluegrass yesterday evening as a wave of low pressure crossed the region. The primary culprits with the severe storms were hail and damaging wind gusts. Small amounts of rotation seemed to occur with one storm that crossed between Richmond and Berea. Heavy rain and lightning were also abundant. All of that is finished now, and we move back to a mostly quiet pattern. Patchy morning fog will continue through the early daylight hours and will make visibility difficult until it lifts. Light drizzle is possible at times. Once the fog lifts and breaks, the temperature will have a chance to rise steadily under partly cloudy skies. We should be touching the upper 80s again today. A few pop-up t-showers are possible for the afternoon as the heating reaches its maximum. These storms will be isolated and nowhere near as strong as what came through last night. That being said, if you hear thunder, seek shelter and wait for the storm to pass. 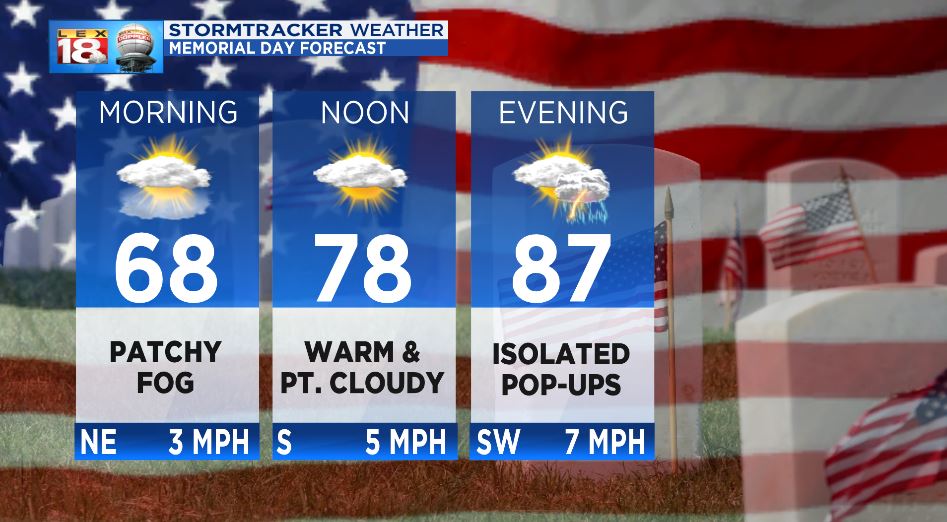