Grand jury indicts one officer on criminal charges in Breonna Taylor case, not for her death
Weather 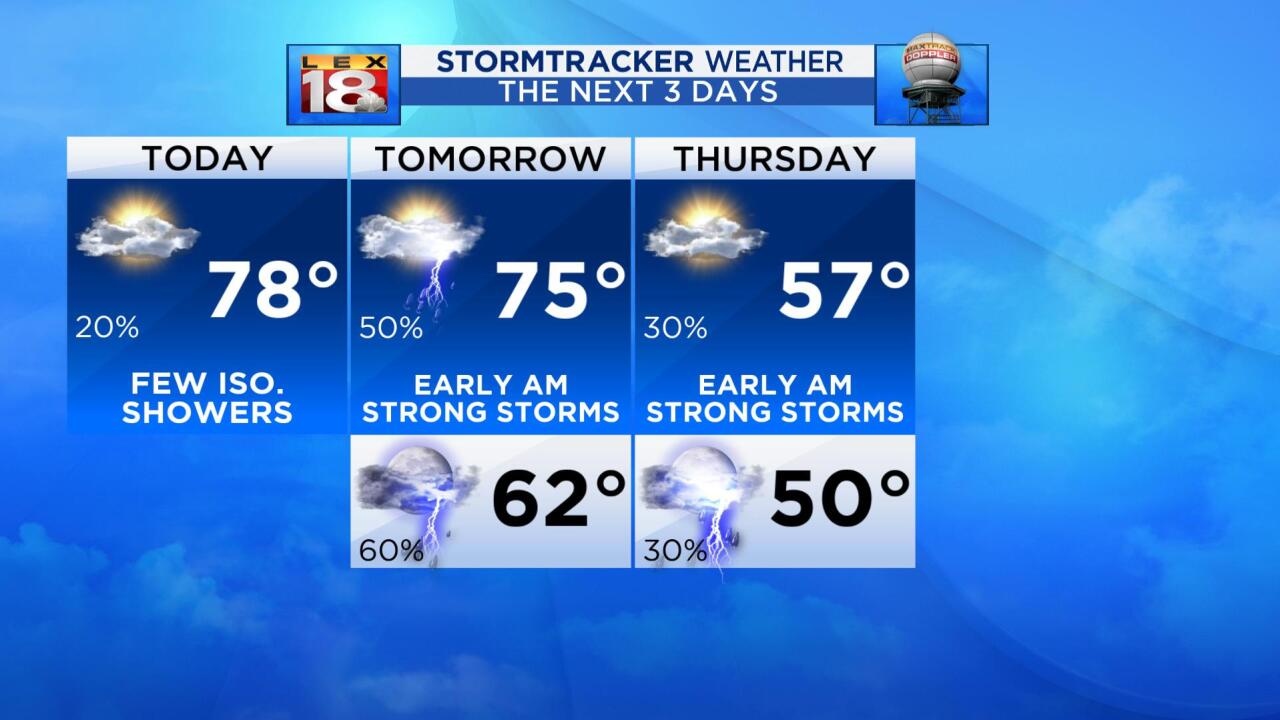 Two back-to-back cold fronts will do more than deliver a late-winter chill to the region. Before that cool air arrives, you can bet on a couple of rounds of strong thunderstorms. Oddly enough, they both seem timed exactly 24 hours apart. They are also both packing the same threats (we’ll get into that). How they differ will be the placement of the storms.

Cold front #1
The front is set to pass through Wednesday morning. The storms will line up between midnight and the late morning hours. This line of thunderstorms has slowly shifted east with each model run and that’s good news for us. Also, the line of storms will be strongest when it’s on the opposite side of the Ohio River. This means the line will weaken as it crosses into Kentucky.

The trajectory has the line moving between our northern and northeastern counties. Most of the activity with this round will be north of Interstate 64 and east of Interstate 75 between midnight and 5:00 a.m.

The SPC is showing that the strongest of the line will be in the early morning set before reaching I-64. Therefore the “slight” risk of severe storms lines up with that thinking. The “marginal” risk extends down to the Bluegrass Parkway. And between the Mountain and Hal Rogers Parkway. This means that as the line continues to weaken and push south, a few leftover storms may still push severe limits.

The threats expected with the first line will be damaging wind gusts and hail. Wind gusts may exceed 58 mph and hail could reach near an inch in diameter. Heavy rain and lightning are secondary threats.

Cold front #2
The second front looks to be timed similarly. Strong to potential severe storms will precede the front and arrive between midnight and the late morning hours of Thursday.

What will differ will be the placement of the line. This line looks to be centered for Central Kentucky which is where the majority of the strong thunderstorms will line up. This line is also moving north to south but more of a straight shot.

You can pretty much go by the timing on front one. Midnight to 5:00 a.m. for the northern and I-64 counties.

5:00 a.m. to 9:00 a.m. for the Counties near the Bluegrass and Mountain Parkways down to the Tennessee state line.

Once again, the threats will be similar with the first front. Strong wind gusts and damaging hail possible. Also expect heavy downpours and lightning.

You can see by the placement of the “Slight” risk that the stronger storms will strikes out western and south-central counties.

Rainfall amounts will not be terribly impressive. Collectively we’ll rack up about a quarter to a half-inch. Of course, higher amounts will be collected under the stronger thunderstorms. Widespread or major flooding is not expected, but brief ponding and high-water spots are possible after a storm passes overhead.

Use caution and remember to head indoor when you see lightning or hear thunder. More information will be available on LEX 18 News and on the LEX 18 StormTraker Weather Page.