Lexington (LEX 18) — Thursday night was a special one for Lafayette senior Richie Ward and his family as they walked across the field on Senior Night for the Lafayette Lacrosse team.

He even scored a goal in his final game, running around the field with his teammates for the final time.

But moments like that weren’t even imaginable five years ago. 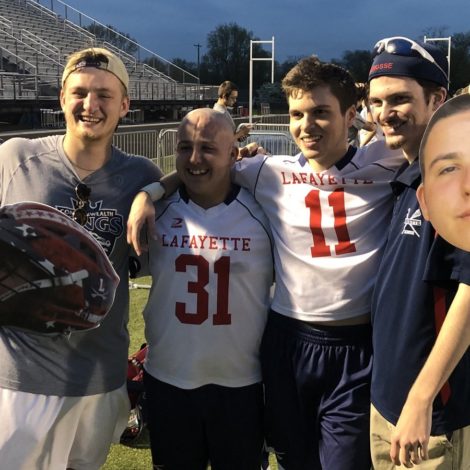 At the age of 13, Richie was taken to the hospital to have an MRI after having a seizure. That MRI revealed extra tissue on his brain.

“You go in, you take it out, it will be no big deal,” said Richie’s mother Jennifer Ward. “We looked at the MRI, ‘I think you’re going to be okay, don’t stress over it, it’s not going to be a huge deal.’ But it was.”

Richie had a tumor growing on the front lobe of his brain, which required two surgeries in a month to get it removed.

He began radiation and chemotherapy treatments, and those treatments kept the tumor growing back for nearly four years.

Until June of 2018, when the tumor returned, forcing Richie to have a third brain surgery.

That’s when Richie found out that he had an extremely rare type of brain cancer.

“I’ve got stage four glioneuronal and glioblastomal brain cancer. I’m one of 23 people in the whole world to have it,” said Richie.

“Just how little there was about it to be able to find made me understand how bad it was that I had gotten it.”

He hasn’t been dealt the greatest hand, but Richie continues to take everything in stride. He continues to get treatment while also attending classes, working a part-time job, and, of course, playing sports.

“Playing Lacrosse really helps me take out some of the anger I feel towards how I’ve been set up for life,” said Richie. But it’s not one of those ‘I’m going to go out here and because I’m upset about how my life is, I’m going to hurt somebody else,’ it’s more of a filter to go back and act like nothing’s wrong.”

“That is the biggest thing. You can’t try to save their lives if you’re not letting them have a life,” said Jennifer. “He’s got to be able to live his life on his terms so that no matter what happens, he’s doing what he wants to do.”

When Richie was diagnosed, he was given less than a 2% chance to being where he is today. However, his battle is not over, as he will have a fourth brain surgery on April 26th, despite going through clinical trials that didn’t work.

His last MRI was in March, where results showed that the tumor continues to grow.