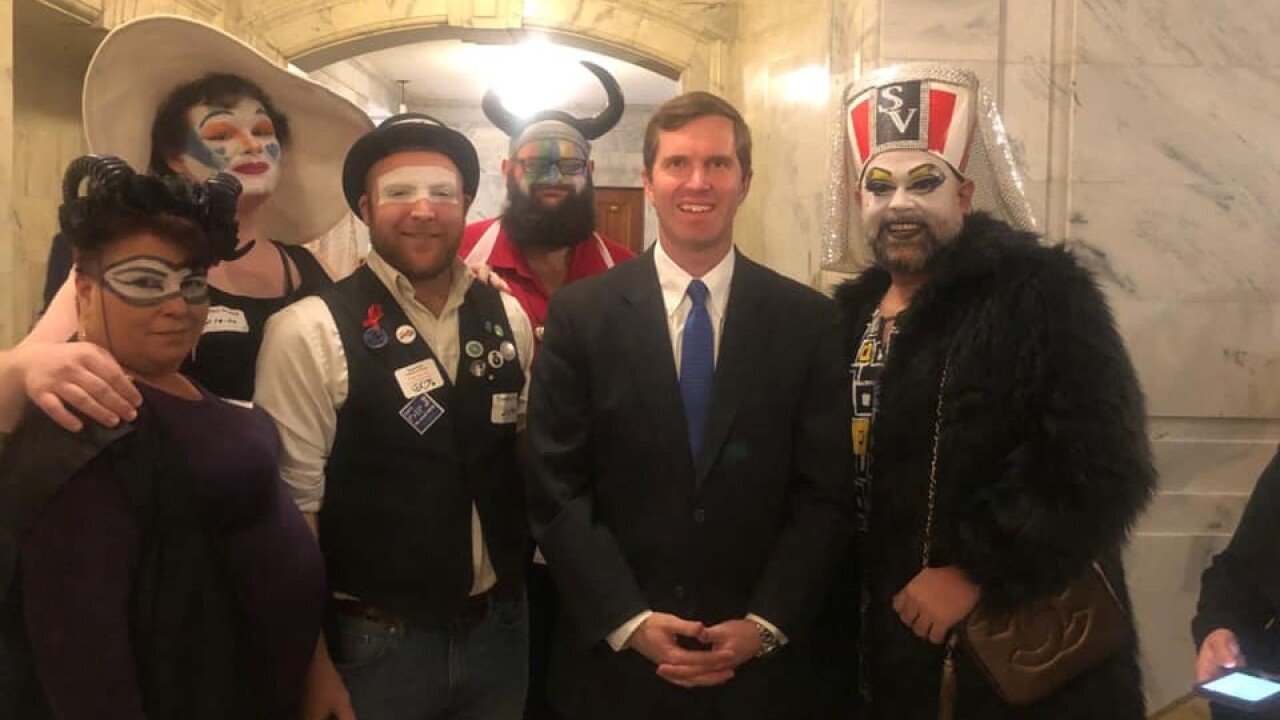 "I believe (he) owe(s) an apology to every single person in that picture and I think he should do it personally," said Beshear on Thursday afternoon.

The picture Beshear is talking about shows him posing with drag queens outside of his office at the Capitol. It was taken on Feb. 19th - the same day LGBTQ advocates gathered in the Rotunda for Kentucky's Fairness Rally.

Beshear spoke at the rally - becoming the first sitting governor to do so. That day, he told the crowd that they are always welcome at the Capitol.

"As your governor, my door is always open to you," said Beshear at the rally. "And as long as I'm the governor, these doors will always be open to anybody."

The photo was then used by republicans at a campaign event on Saturday. A video shared on Representative-elect Richard White's official Facebook page shows Senator Wheeler speaking to a group of voters in Elliot County a few days before White won a special election in that district.

The video shows Wheeler walking around and showing the group the photo of the governor and the drag queens on his phone.

"I want to show y'all a picture. This is what our democrat governor is about today, "Wheeler said to the crowd. "Take a look, these are the values that the Democratic party of today is out there trying to convince our children is the right way to live."

Later on in the video, Wheeler criticized the governor.

"I would have never thought that there would be a day where we have people dressed in devil horns celebrating with our governor in our beautiful Capitol in Frankfort, Kentucky," said Wheeler. "A place with much religious imagery and yet we have a Governor that celebrates it being defiled."

On Thursday, the Kentucky Democratic Party called for Wheeler to resign.

“It’s time for Phillip Wheeler to go. He’s an embarrassment to the Commonwealth of Kentucky, and his hateful, ignorant comments do not have any place in the Statehouse,” said Marisa McNee, spokeswoman for the KDP. “If Senator Wheeler does not resign, the Senate must censure him immediately.”

Wheeler told LEX 18 on Thursday that he will not resign.

"I think it's being presented as an LGBTQ issue and in my opinion, it's not an LGBTQ issue," said Wheeler. "It's a question of decorum and this particular group - the post with the governor- I mean, part of their agenda is to mock people of religion by using specific religious garb. Like, I think the one used a habit made out of a KFC bucket. One used devil horns. You know, I think that the intention, or the posing of the governor with the group that mocks traditional religion, is just a question of decency. Is that really what we want to support in the Commonwealth of Kentucky?"

The drag queens featured in the photo that Wheeler is talking about are from two groups - Derby City Sisters and Kentucky Fried Sisters. They're both from the Kentucky order of the Sisters of Perpetual Indulgence, a national charitable group that helps the LGBTQ community.

In a Facebook post on Thursday, the Derby City Sister invited Senator Wheeler to get to know them.

"We are a nonprofit, who seeks to let everyone know that they are loved and that they belong," said the post. "We advocate for those without a voice. We are dedicated to community service, and we humbly promote human rights and respect for diversity."

"So gentleman, would you like to actually get to know us before you judge us?"

The other person in the photo, Governor Beshear, also addressed the situation - calling Wheeler's comments homophobic.

"They were absolutely homophobic," said Beshear. "I don't think he is the fashion police for the Capitol. I believe he owes each and every one of them an apology. They're as much Kentuckians as anybody else."

Beshear also made it clear that he does not regret taking the photo.

"I would absolutely take that picture again because those are Kentuckians that were here at their Capitol."