Are changes being made at the Franklin Co. Regional Jail after the death of an inmate? 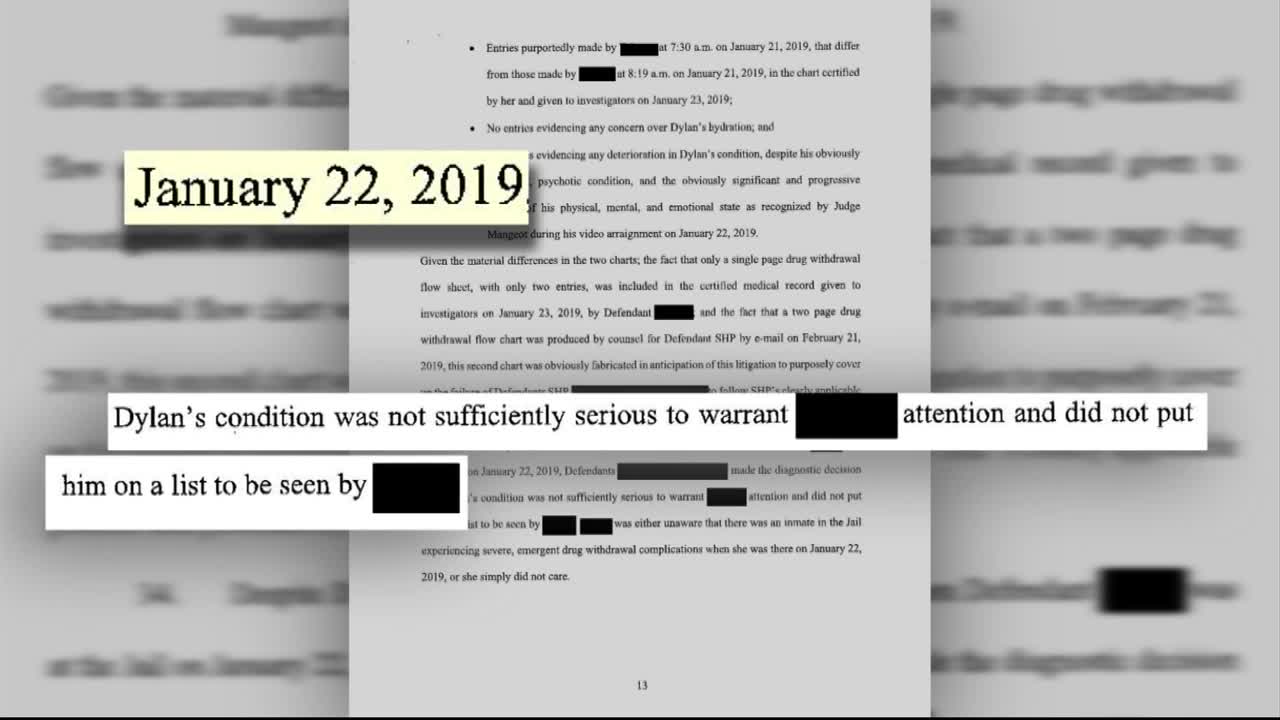 FRANKFORT, Ky. (LEX 18) — When Dylan Stratton was arrested last year, it was his first and last trip to the Franklin County Regional Jail.

His mother, Leslie Glass, claims Stratton had a seizure then slowly detoxed to death due to a lack of emergency medical care.

"Why? That's the question I keep asking: Why?" says Glass. "Why wouldn't anyone help him?"

A judge who had arraigned Stratton in person just days earlier had this reaction when she viewed video of him in jail, sitting in a chair unable to speak.

"Is this a detoxing situation?" Judge Kathy Mangeot asked.

"Have they been medically treated?" Mangeot asked.

"Yes, your honor," the deputy replied.

Less than 24 hours later, Stratton was found dead on the concrete floor of his cell. The coroner ruled that the cause of his death was cardiac dysrhythmia, and noted obesity and drug use.

"If you had taken him to the hospital, he would not have died," Greg Belzley, an attorney for the Stratton family said.

One year later, attorneys are suing for wrongful death on behalf of Stratton's family, saying he should have been sent to a hospital instead of being kept at the jail. They want to know what the jail and Southern Health Partners, the company hired to provide medical care to the inmates, are doing differently.

"You've got a young man who is naked in a cell. He's talking to people who aren't there, he suffering," said Belzley. "It's obvious you do something, a nobody did anything."

According to the family's lawsuit, a nurse practitioner was at the facility seeing patients Jan. 22, 2019, the day before Stratton died, but never saw him. The lawsuit claims other jail nurses did not put Stratton on a list to be seen by her.

"Why would they not see what you see in that video and act?" said Belzley.

LEX 18 made repeated requests, in person and over the phone, to speak with former Jailer Rick Rogers, who never responded to the requests. Rogers retired in early September.

Lawyers for the Franklin County Regional Jail have asked a federal judge to dismiss the case, claiming the lawsuit fails to identify specific actions taken by any particular staff that had contributed to Stratton's death. The motion states that staff kept logs on Stratton's health, showing he occasionally failed to eat his meals, was given a shower, was vomiting and had diarrhea, and received water from a deputy jailer due to concerns over dehydration.

A deputy jailer also contacted the jail's mental health provider, who recommended that Stratton remain under observation and be placed in a safety chair as needed.

"We've made a few changes since I came in," said Jake Banta, Rogers' successor as jailer at the facility. "Nothing drastic."

Banta, sat down with LEX 18 but said he could not speak about Stratton or his care due to the pending litigation. But, he did talk about treating everyone from staff to inmates equally.

"My philosophy is, people make bad decisions sometimes but that doesn't make them a bad person," Banta said. "I believe in the justice system, but I also believe these people in here are human beings. We're going to be firm, fair and consistent."

LEX 18 learned that before Banta took over, the jail and Franklin County Fiscal Court renewed its contract with Southern Health Partners, a Chattanooga-based company that serves more than 30 jails in Kentucky. It's the same company that the Stratton family's lawsuit claims fabricated observation records in his case.

Glass claims that the day her son died, a nurse turned over only two columns of the observation chart. Then, more than a month later, the same nurse submitted two pages of entries, which Glass believes were fabricated.

"He was unable to talk," Glass said. "He was in psychosis."

The lawsuit says there were no entries showing any deterioration in Stratton's condition, despite his obviously emergent psychotic condition and the progressive decline of his physical, mental and emotional state as recognized by Judge Mangeot less than 24 hours before Stratton died.

A copy of Stratton's withdrawal chart two days before his death showed "No" circled for signs of weakness, confusion and slurred speech.

"If a judge tells you to do something, then why wouldn't you do it?" said Glass.

Glass says Southern Health Partners didn't follow its own policies, which state on the company's withdrawal form that staff report "all findings" to the medical director, especially if the patient is not responding well. It goes on to state that if a patient experiences changes or deterioration, staff must notify a physician immediately.

"They should be ashamed of themselves," she said. "What kind of medical establishment are you?"

LEX 18 again reached out to Southern Health Partners for an explanation, but we received no reply. Last fall, an attorney referred LEX 18 to the company's response to the lawsuit, which claims its staff acted in "good faith" and that if Stratton suffered any harm it was as a result of his own actions, not those of SHP.

Banta said he still has things to learn but is committed to accountability and care.

"As much as possible," he said. "I've been jailer for four months. I'm not perfect and I'm still learning. But yes, we keep checks and balances on everybody that come through the door as much as possible.

Glass, Stratton's mother, said she hopes there's been a significant change in care at the jail.

"I don't know how so many people could walk past my son, and no one wanted to help him," she said.