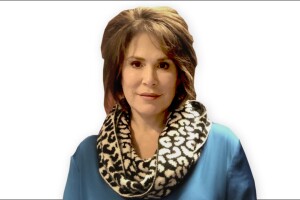 Leigh Searcy is from Versailles, Kentucky and is a News Reporter for LEX 18 news at noon, 5, 5:30 and 6 p.m.
Leigh was a Reporter for WLWT in Cincinnati for five years. She has been honored for “Best Reporter” by the Associated Press.

Leigh obtained her degree in Broadcast Journalism from Western Kentucky University. She enjoys Horseback riding, outdoor activities and decorating. Leigh is married and has a son, Reece (born December 2006) and a daughter, Olivia (born June 2008). The family has two dogs and two cats. Her favorite books include mysteries, and she is currently enjoying a new author named Karin Slaughter. Leigh’s favorite movie is “Beaches” – she loves Bette Midler and any Tommy Lee Jones and any Morgan Freeman movie. She loves living in Kentucky with the beautiful horse farms that make this area so unique.

Leigh considers it a privilege to share and tell people's stories. As journalists, people trust us to tell their story accurately, fairly and with compassion. She takes that responsibility seriously. One of her most memorable stories involved helping a boy named Antonio Reese get a van after he was randomly shot in the head while riding with his family. He received a brain injury and spent months recovering. An LEX 18 client saw Leigh's stories and offered to give the family a van to go to Antonio's many doctor appointments. The public also donated money so Antonio's family could buy him a much needed service dog. Those acts of kindness renewed the family's faith in society, as a whole.

“I enjoy my job. I love the competitiveness of it. I never know what story I’m covering from one day to the next and I love the spontaneity of it. It’s so nice to meet so many interesting people and yes, animals!”