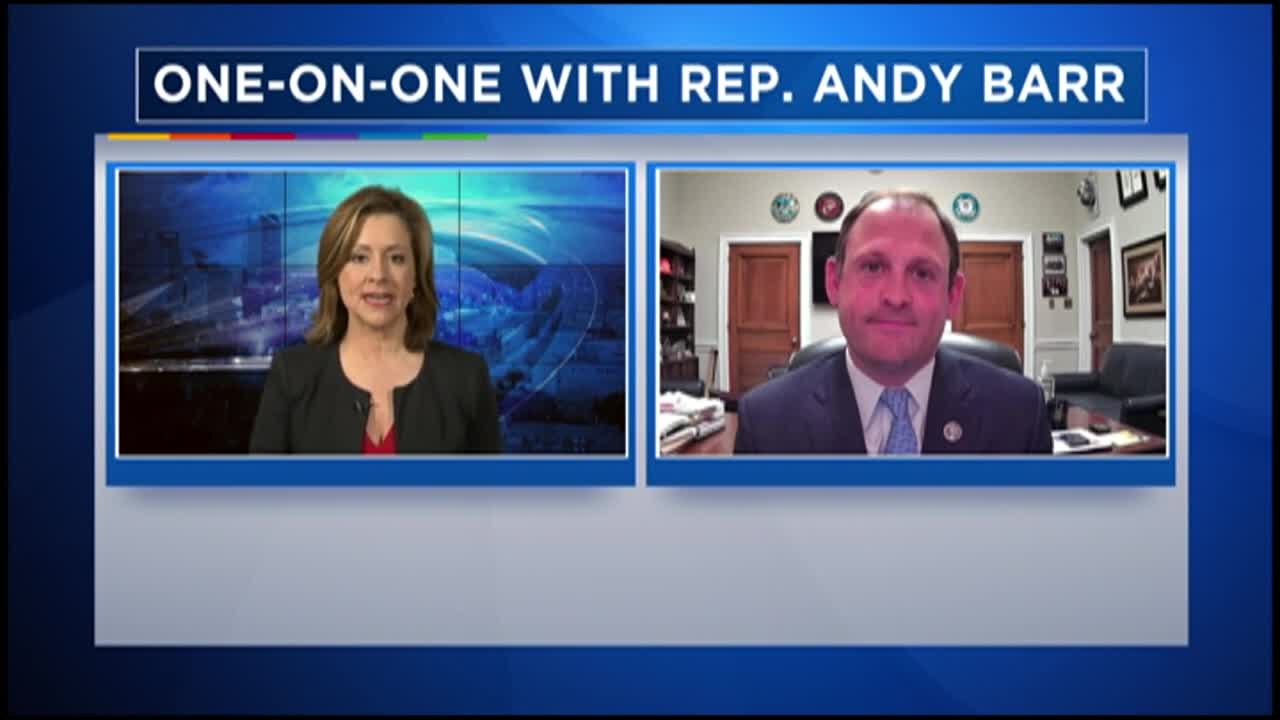 In a wide-ranging interview, Barr joined LEX 18's Nancy Cox to talk about Wednesday's vote along with several other topics, including the role of Big Tech in American politics, the rollout of the COVID-19 vaccine to Kentuckians, and if he will attend President-elect Joe Biden's inauguration.

Congressman Barr also discussed how Americans should come together during these difficult times instead of resorting to violence.

Rep. Andy Barr: President Trump's words 'do not rise to the level of impeachable conduct'

Barr called President Trump's rhetoric prior to the Capitol riots as "regrettable and irresponsible" in a statement. He also said the president should have taken "more decisive and forceful action" to help diffuse the situation. Congressman Barr also told LEX 18 the president "bears some responsibility" in the matter and he is "not blameless."

However, he said President Trump's words do not rise to the level of impeachable conduct.

"I do not believe the President's words, while unfortunate, satisfy the legal definition of incitement," Barr writes in his statement.

In an interview with LEX 18, Congressman Barr said with seven days left in Trump's term, he does not see how the impeachment vote provides a path forward "to bring the country to the healing and the unity that we need." He referred to the impeachment vote as an act of "political vengeance."

Barr said we need to move forward as a country, which is why he voted to certify the 2020 presidential election results.

The congressman says he wants the country to be a place where people can find common ground through civilized discussion and debate while condemning violence "in any form."

Congressman Barr was also asked about the recent decision by the UK men's basketball team to kneel during the National Anthem prior to their win over Florida on Saturday.

The team says they chose to kneel as a message towards the ongoing issues that are taking place in the nation. Head coach John Calipari said he agreed with their decision.

"I want to listen to what they're saying and I want to support them if they want me to be there," said Calipari.

Congressman Barr said many people find it offensive to kneel during the National Anthem.

"I've never really understood why anyone would think that doing something offensive and divisive would be a way to persuade someone to your point of view," Barr said. "Of course, the First Amendment protects that, free speech protects their right to do it. But I've never understood why anyone would think that disrespecting the National Anthem of a country that gives you the very right to protest somehow would persuade people to your point of view. I've never quite understood that."

Barr reiterated Americans should get back to civilized discourse instead of offensive conduct or violence to sway one's opinion.

In a statement Friday evening, Rep. Andy Barr tweeted he was "outraged" by the decision as other world leaders, including officials from the Chinese Communist Party, could still operate freely on the platform.

I am outraged that an American social media company permanently banned a U.S. President and other conservatives from its platform while the Ayatollah of Iran, the Leader of the Nation of Islam and many officials from the Chinese Communist Party operate freely on their platform ⬇️ pic.twitter.com/6EdwW367ST

While speaking with LEX 18's Nancy Cox, Congressman Barr said he believes there's a double standard when it comes to conservatives.

"I think it's very offensive that Twitter or Big Tech companies ... would censor the speech of a U.S. president, even a president that some view as offensive when at the same time, they are elevating the speech of, literally, the enemies of the United States," said Congressman Barr. "What it looks like to many people is selective censorship; it's the politicization of speech."

Congressman Barr says he supports the peaceful transition of power and will attend President-elect Joe Biden's inauguration on January 20. He says he knows he represents some constituents who voted for Biden.

"Even though the candidate from my party didn't win the presidential election, I think it's very important that members of Congress go to the inauguration," Barr said. "I want to work with the incoming administration to the president where I can and when I need to be the loyal opposition, I will."

Barr said he feels safe to attend Biden's inauguration despite last week's riots and that there will be a "much more robust" security presence compared to previous inaugurations.

Rep. Andy Barr says we need to be 'agile and flexible' with vaccine rollout

As COVID-19 vaccines make their way to frontline workers and those most at risk, many have been disappointed in the vaccine's rollout.

The federal government set a goal of having 20 million people vaccinated against COVID-19 by the end of 2020, starting with health care workers and the elderly in December.

Yet, according to the CDC, nearly two weeks into the new year, only 8 million people have received an initial dose and the numbers are even smaller for those who have received the second, required follow-up shot: just over 272,000.

When it comes to the vaccine's rollout to Kentuckians, Barr says we need to be "agile and flexible." He says getting the vaccine should not be mandatory, but if someone chooses to not get vaccinated, that dose should be given to the next vulnerable population.

"We need to make that vaccine that was declined available, quickly, to the next person so that we can move more of the population — into that population that's been vaccinated," Barr said.

Congressman Barr, who has received both doses of the vaccine, says Americans should be encouraged to get vaccinated. He says people should trust the scientists and the government for approving the vaccines.