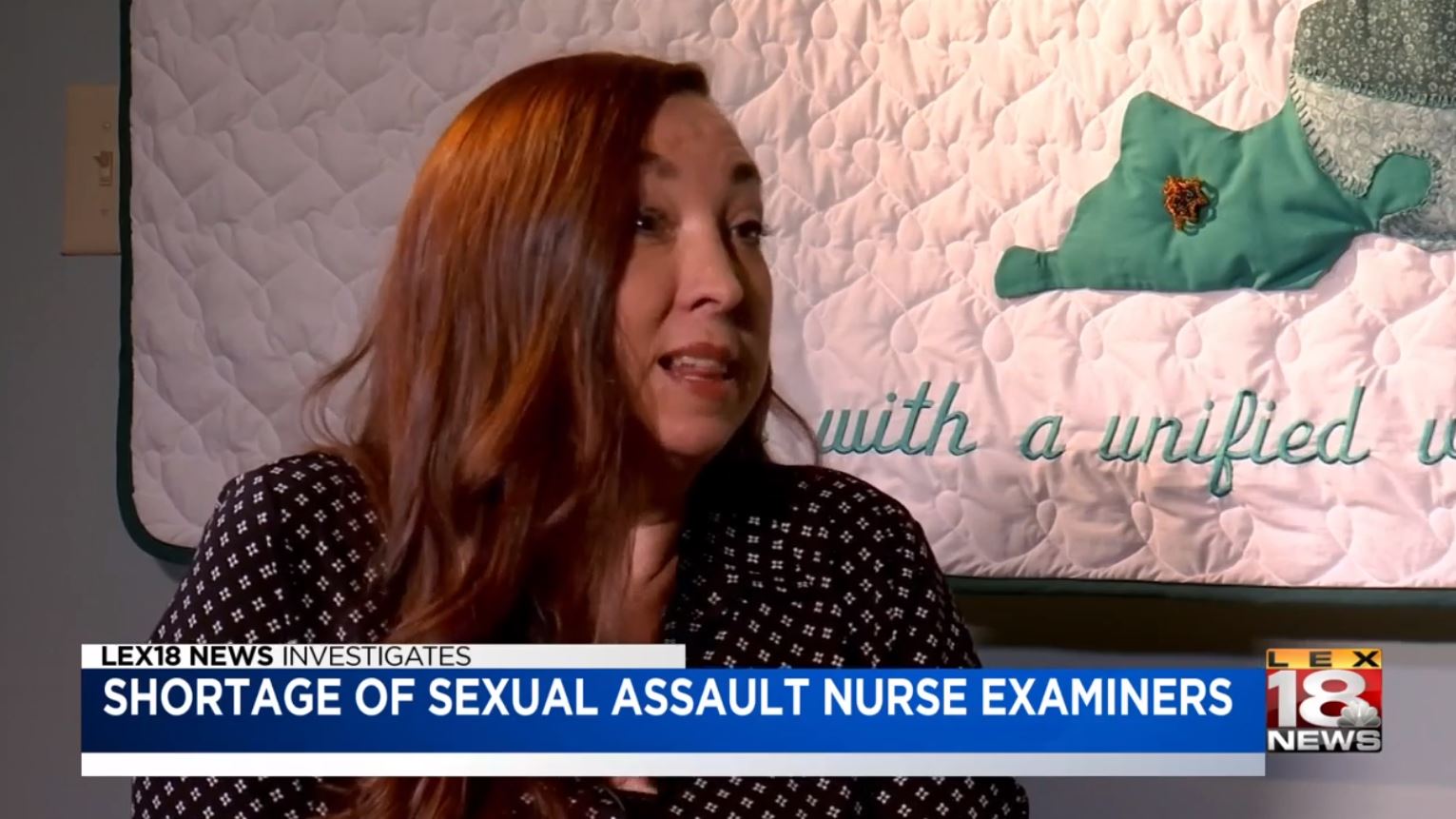 LEXINGTON, Ky. (LEX 18) — Anyone who ever has gone through the trauma of sexual assault knows the emotional and physical toll it takes on body and mind.

There are specially trained nurses -- Sexual Assault Nurse Examiners, or SANEs -- who have the medical and forensics experience to collect evidence important for a conviction, if a victim decides to prosecute.

But here in Kentucky and across the nation, there's a critical shortage SANE nurses.

Victims of rape or sexual assault often are scared and unsure what to do. Imagine building up the courage to request a rape kit and examination, only to find out you have to wait in the hospital for hours to get that done or are sent elsewhere. It happens.

Fayette County Commonwealth's Attorney Lou Anna Red Corn said they are critical from beginning to end and can testify at trial. Red Corn values their dual role in the judicial process. "That's the beauty of sexual assault nurse examiner, they're first of all trained in the forensic collection of the evidence and they're a medical person, they have compassion" said, Red Corn.

Of Kentucky's 78 hospitals with emergency rooms, only seven are deemed "SANE ready." That means only seven have full-time, around-the-clock SANE nurses ready to step into action if needed.

Other medical staff members can perform these examinations, but prosecutors and victims' rights advocates say they don't have the expertise in collecting forensic evidence.

Eileen Recktendwald, executive director of the Kentucky Association of Sexual Assault Programs in Frankfort says the collection of evidence is key. "The doctors haven't had the evidence collection protocol so they don't know what to do. It could be they collect the evidence and if they didn't do it correctly, it could not produce any results."

In Kentucky, it's a person's right to walk into a hospital that provides emergency service and ask for a forensic sexual assault examination. LEX 18 talked to a rape survivor who wants to spread the word about victims' rights.

Hilary Sykes says she was raped and never went to the hospital to get an examination because, she says, a doctor told her too much time had passed for strong evidence to be collected. Sykes says that, in fact, that was not the case. Sykes said she was told by people there that it had been too long, when only nine hours had passed. According to SANE nurse instructors, victims have up to four days to get a forensic medical exam.

Sykes says her rapist walked. "Getting the evidence would be the best thing to help with trial It's hard enough getting a conviction, just having images of my bruises, no photos taken of me."

Now, she has made it her mission to try to spread awareness and get hospitals to hire full-time SANEs. She says victims of sexual violence deserve that commitment and hospitals are coming up short.

"There's a statistic in Kentucky that one out of two women are sexually assaulted in their lifetime. So that right there states that you're obviously doing something so wrong that people aren't ever coming forward to your hospitals because they don't trust that you can provide the service that is needed," Sykes said.

So how do hospitals here stack up? Are they SANE ready? LEX 18 checked the numbers in the central Kentucky area. According to the Cabinet for Health and Family Services, only seven of the 78 hospitals with emergency rooms are deemed "SANE ready." They include, Fleming County Hospital, Hardin Memorial Hospital, Meadowview Regional Medical Center in Maysville, Owensboro Health Regional Hospital, Saint Joseph London, St. Elizabeth Edgewood and St. Elizabeth Florence.

Those who advocate for better coverage say this is not a money-maker, and nurses who want the SANE certification often pay for their own training. That's 40 to 60 hours of training, often performed on nurses' own time.

Rape Survivor Hilary Sykes is on the Kentucky attorney general's Survivor Council. Her mission is to make victims aware of their rights. She says knowledge is power. "If you're going through it you need to stop there and say this is the law I need a rape kit. Stand up for yourself. One thing I really wished I realized being younger when this happened is you have to be your own advocate", said Sykes.

Eileen Recktenwald with KASAP says in Kentucky, alone, 47 percent of the population of women are sexually assaulted before they turn 18. In Kentucky, sexual assault is touching someone in an unwanted or offensive way.

Though only seven Kentucky hospitals with emergency rooms are deemed, "SANE ready" with 24-7 coverage, LEX 18 learned UK Medical Center has five SANE nurses that work under contract by Lexington Police. A police spokeswoman says the department averages 60 to 80 cases a year.

Recktenwald says hospitals need to do more, "In my mind it's a community service."

Prosecutor Lou Anna Red Corn says she sees higher conviction rates with SANE nurses, "When a patient chooses to prosecute a crime we end up with better evidence."

Rape survivor Hilary Sykes believes it is time more hospitals prioritize sexual assault nurse examiners. "You're going through something so hard, it needs to be given the full attention that it deserves. It's evidence of a crime, it's against the law to turn people away, more can be done," said Sykes.