The Latest from Saturday’s Belmont Stakes (all times local):

Justify has won the Triple Crown.

The Preakness and Kentucky Derby winner became thoroughbred racing’s 13th Triple Crown with a front-running victory in the Belmont Stakes.

American Pharoah ended a 37-year Triple Crown drought in 2015. It was the second Triple Crown for trainer Bob Baffert and the first for jockey Mike Smith.

Gronkowski finished second in the 1 1/2 mile race. Hofburg was third in the thrilling race in which Justify was challenged momentarily at the top of the stretch and then drew off the roars of a crowd of 90,000. 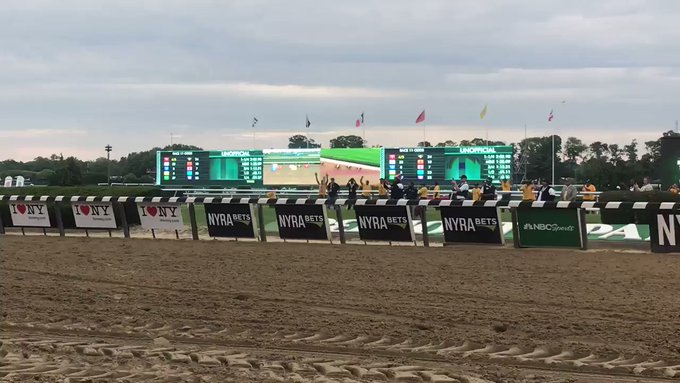 DID YOU SEE THAT!?!? JUSTIFY WINS THE TRIPLE CROWN

With a little less than 30 minutes to go until the Belmont Stakes, two trucks are watering the dirt strip at Belmont Park.

It’s been baked dry by sunny skies and 80-degree weather. Kentucky Derby and Preakness winner Justify will be taking to the sprawling oval to try to become racing’s 13th Triple Crown winner and second in four years with a victory in the 1 1/2-mile race. Justify won the first two legs on sloppy tracks.

The crowd of roughly 90,000 fans and bettors around the world clearly expect Justify to win the Triple Crown.

The Kentucky Derby and Preakness winner opened at the 4-5 favorite with about an hour to go before the Belmont Stakes. The next best choices were 6-1 odds shared by Bravazo and Hofburn. Bravazo finished second in the Preakness and Hofburg was sired by Tapit, whose sons have won two of the last races in the Belmont, which is run at a 1 1/2 mile. 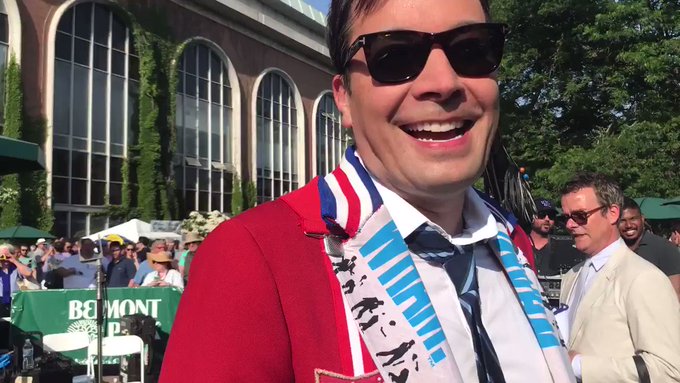 Hey @jimmyfallon, who do you want to win @BelmontStakes?

Bob Baffert is 2-for-2 at Belmont Park so far.

The Hall of Fame trainer has won the $400,000 Brooklyn Invitational with Hoppertunity. The 7-year-old bay horse won by 2 1/4 lengths and paid $9.10 to win — a generous price on a Baffert trainee.

Of course, the race that Baffert and Smith really want to win is the Belmont Stakes. Smith will be aboard Justify in the colt’s bid to become racing’s 13th Triple Crown winner. 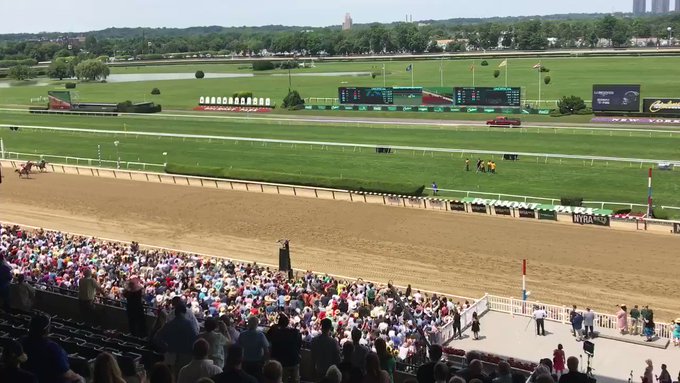 HOPPERTUNITY to the front in the G2 Brooklyn!!!

The fashion scene at the Belmont Stakes is as diverse as New York itself.

It ranged from fans in T-shirts and shorts to men in suits and women in dresses and an assortment of hats. Some women wore ones topped with big decorations that looked like the Belmont Stakes trophy.

If there’s a common theme among the crowd, it’s the desire to take a selfie to bear witness to their attendance at Justify’s bid for the Triple Crown.

The food in some ways is typically New York: pizza, wings, hot dogs and beer.

Bob Baffert and Mike Smith have teamed up to win a big race at Belmont Park.

No, not the Belmont Stakes. That’ll be run later Saturday.

The Hall of Fame trainer and jockey won the $750,000 Ogden Phipps with even-money favorite Abel Tasman.

The 4-year-old filly cruised to a 7 1/2-length victory while snapping a three-race skid.

It was the first of five mounts Smith has on the 13-race card.

The 52-year-old jockey knows the sprawling track and its sweeping turns well, having been the leading rider in New York from 1991 to ’92.m. 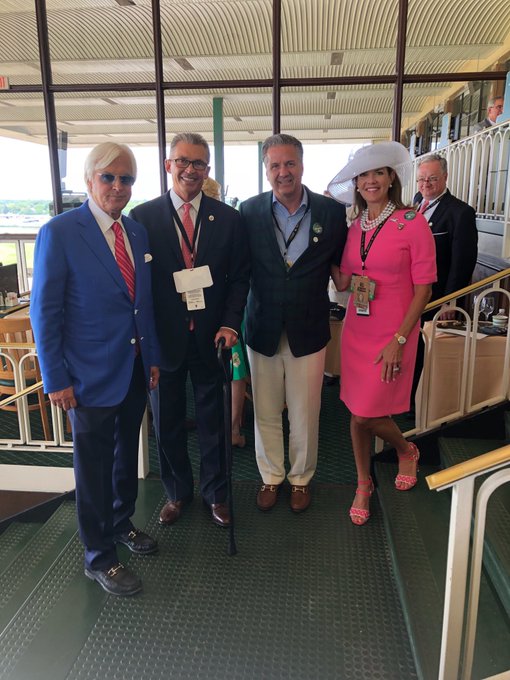 At the Belmont hanging with Hall of Fame trainer Bob Baffert and Winstar Farms owner Kenny Troutt and his wife Lisa.

Fans are streaming into Belmont Park in anticipation of watching Justify try to become horse racing’s 13th Triple Crown winner and second since 2015.

Skies are sunny and the temperature is forecast for 73 degrees when the Belmont Stakes is run early Saturday evening. The crowd has been capped at 90,000.

It will be the first time Justify runs on a dry track in the Triple Crown series. He won the Kentucky Derby and Preakness on sloppy tracks after heavy rain fell.

Justify is taking on nine rivals, the largest number that a potential Triple Crown winner has ever faced.

Among those expected to be on hand is New England Patriots tight end Rob Gronkowski. His equine counterpart named Gronkowski is a 22-1 shot in the Belmont. The football star has purchased a small interest in the colt. 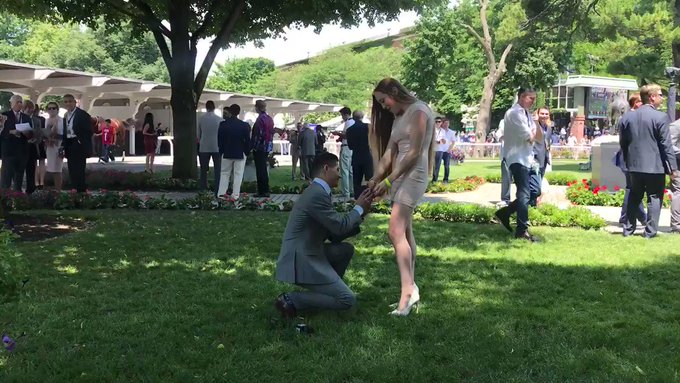 DAVID COHEN GETS ENGAGED! First proposal of the day

Justify is seeking to become horse racing’s 13th Triple Crown winner and second in four years when he runs in the Belmont Stakes.

The Kentucky Derby and Preakness winner is the early 4-5 favorite for Saturday’s 1 ½-mile Belmont, the longest and most grueling of the three-race series.

If Justify beats nine rivals in the 150th Belmont, Bob Baffert would become the second trainer to win the Triple Crown twice. He did so in 2015 with American Pharoah, a colt that ended a 37-year drought.

Justify is 5-0 in a career that began with his first race in February. He didn’t compete as a 2-year-old.