Lexington, Ky. (LEX 18) – The No. 3 ranked Kentucky men’s soccer team is preparing for its Elite 8 showdown with No. 11 Maryland Friday at The Bell.

The Wildcats defeated Lipscomb last Saturday 2-1 in thrilling fashion, scoring in the final 9 minutes of the match, to reach the Elite 8 for the first time in program history. 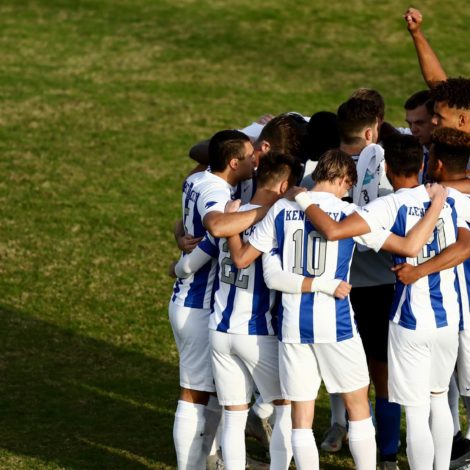 While it’s Kentucky’s first time in the Elite 8, its the fourth time the Terrapins have made an appearance in the quarterfinals.

Maryland is also a two-time National Champion, winning the College Cup in 2005 and 2008.

“They’ve had the history behind it, they’re always a quality team, they’re a good program,” said Kentucky forward and captain JJ Williams. “You have to respect them, you have to respect and know that it’s not going to be an easy game or an easy performance, but at the same time, if we focus on making sure that we’re quality in training and make sure that we take care of all of the little things, we’ll be fine.”

As a No.3 seed, UK has had homefield advantage throughout the NCAA tournament, which has been a big help for them to play in front of their home fans at The Bell.

“We’re undefeated, I think we’ve scored 32 goals, we’ve only let two goals in all year,” said Kentucky head coach Johan Cedergren. “It’s not easy, it’s much better to be home because they can go to class, they can go through their normal routine, they can see family and friends so it’s been wonderful to get the number 3 seed to e able to stay at home all the way through the quarterfinals.”

Kentucky and Maryland will begin its match at 6pm at The Bell on Friday night.