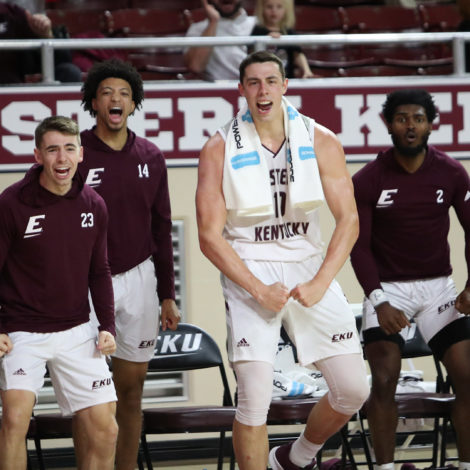 RICHMOND, Ky. – Kelvin Robinson deflected a pass with 3.5 seconds left in the game to help the Eastern Kentucky University’s men’s basketball team hold on for a 79-77 win over visiting USC Upstate on Wednesday.

Upstate in-bounded the ball with 9.2 seconds left on the clock and down by two.  Robinson got his hand on a cross-court pass near the Spartan three-point line with 3.5 seconds to go.  The ball stayed in play as it rolled to the opposite baseline, going out of bounds with 0.3 seconds remaining.  The visitors did not get off a shot to win.

The Colonels (5-4) led for more than 39 minutes of the game, but had to hold off a late comeback bid by the Spartans.

Back-to-back dunks by Tre King and Peyton Broughton gave EKU a 14-point second half lead, it’s largest of the game.  The Colonels were up seven when the duo put on a dunk show.  After King threw one down, Broughton came up with a steal on the inbound pass and brought the fans to their feet with a one-handed jam.  That bucket gave Eastern a 53-39 lead with 13:41 left in the game.

Three free throws from Robinson and Mayo pushed Eastern back in front by five, 79-74, with 2:09 to go.  The Colonels didn’t score again.  Everette Hammond hit a jumper and made 1-of-2 at the free throw line to get Upstate back within two, 79-77, with 38 seconds left.

Mayo had a team-best 14 points to go along with seven rebounds.  He now has 1,799 career points and is 34 away from breaking Eastern Kentucky’s scoring record held by Matt Witt (1,832).

The Spartans shot 44 percent, compared to 36 percent for EKU, but turned the ball over 26 times.  Eastern turned those turnovers into a 29-15 advantage in points off turnovers.

Moore scored a game-high 32 points and had 10 rebounds for USC Upstate.