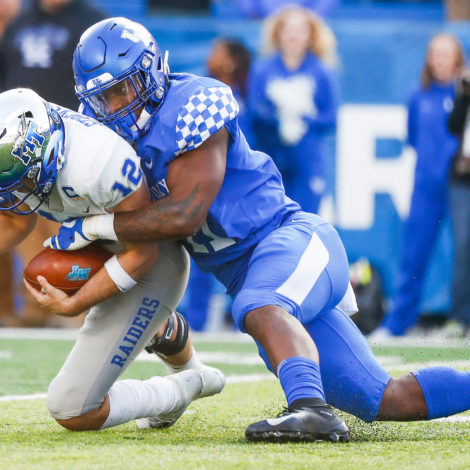 The award for Stallings, a senior from McComb, Miss., follows first-team All-Southeastern Conference honors from The Associated Press and SEC coaches. Stallings was responsible for only one-half sack quarterback sack all year.  He totaled 170 blocks at the point of attack and had 55 knockdown blocks. He blocked for first-team All-SEC running back Benny Snell, who has rushed for 1,305 yards and 14 touchdowns. Earlier this season, Stallings was SEC Offensive Lineman of the Week following wins over Florida and Mississippi State.

Allen, a senior from Montclair, New Jersey, has been a pass rush terror so far this season. With 28.5 career sacks and 14 sacks in 2018, he now holds UK’s career and single-season records. His 11 career forced fumbles

tie former Wildcat and current Chicago Bear linebacker Danny Trevathan for UK’s career mark (forced fumbles stats available since 1988).  He leads the team with 84 tackles and paces the SEC in sacks, tackles for loss (18.5) and forced fumbles (5). Twelve of his 14 sacks have come in the second half of games, including eight in the fourth quarter. In five of UK’s nine wins this season, Allen had a sack late in the fourth quarter that was crucial to the Wildcat victory.