No. 10 Cats Ready to Battle with No. 6 Cornhuskers in NCAA Regional Semifinal 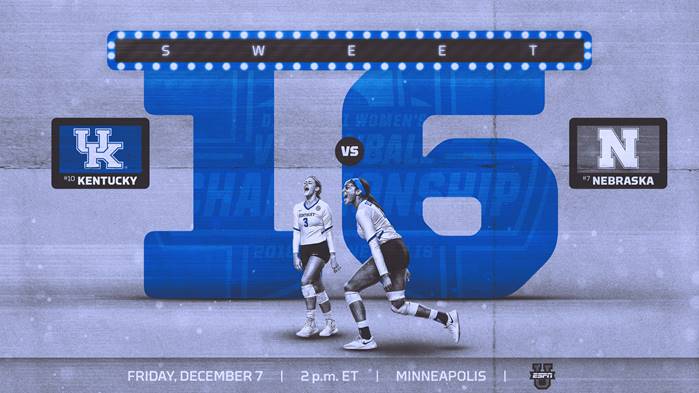 MINNEAPOLIS, Minn. – Ready to make its second consecutive Sweet 16 appearance, the No. 10 seed Kentucky volleyball team will face the Nebraska Cornhuskers inside Maturi Pavilion on the campus of the University of Minnesota at 2 p.m. ET on Friday.

UK is coming off back-to-back sweeps in the first and second rounds at home in Memorial Coliseum against Murray State and No. 12 Purdue.

Kentucky and Nebraska met in the NCAA Regional Finals a season ago before the Cornhuskers went on to win the National Championship. With a win, UK will match its longest win streak in program history of 24 (1987).

UK ranks in the top 10 in the country in hitting percentage at fourth with a .305 mark for the season and eighth in kills per set at 14.50. The Wildcats also come in at 20th in assists with 13.22 per set. Senior Brooke Morgan ranks sixth in the nation in hitting percentage with a stout .409 clip while junior outside hitter Leah Edmond ranks 13th in kills (4.63 per set) and sophomore setter Madison Lilley is 14th in assists with 11.33 per set.