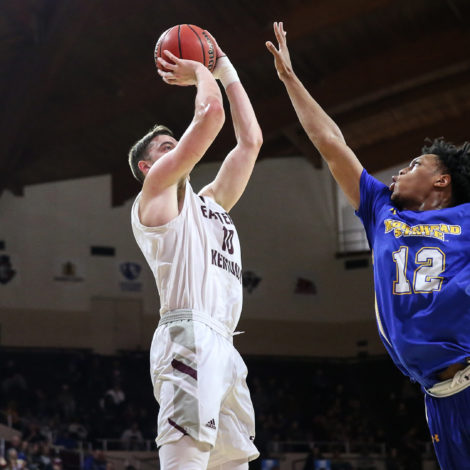 Eastern led by three, 77-74, with 1:19 left in the game. Morehead State’s James Baker then hit a tough jumper to make it a one-point game.

On EKU’s next possession, senior Nick Mayo missed a three-pointer. Malek Green pulled down the rebound for the visitors and was fouled in the process. He made both ensuing free throws to give the Eagles a 78-77 advantage with 20 seconds on the clock.

EKU got the ball to Mayo in the paint with six seconds left, but his jumper rolled out.

Freshman Jomaru Brown led all players on the night with 31 points. Redshirt junior Dujuanta Weaver chipped in 17 points on 5-of-9 shooting from deep.

The game featured an incredible 22 lead changes and 11 ties.

EKU won the turnover battle, 15-8; however, the Colonels were out-rebounded on the night 38-28.

After Morehead State ran out to a 9-2 lead to open the game, the Colonels rallied and took their first lead, 13-12, on a layup by Brown at the 13:05 mark of the first half. From there, neither team led by more than five points at any time the rest of the way.