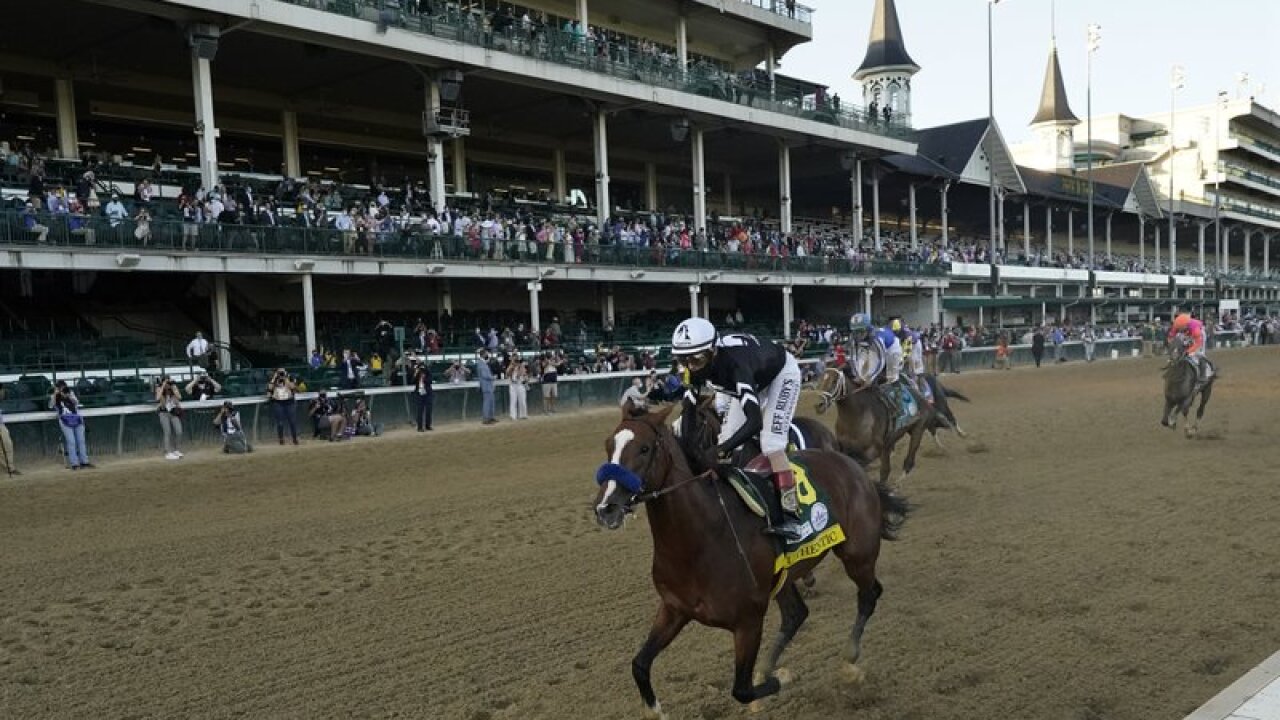 PIMLICO, Mary. — Preakness race week began Monday with a draw that lacked the usual fanfare of owners and trainers packing into a crowded tent with an open bar in the infield. Kentucky Derby winner Authentic was installed as the 9-5 morning line favorite and drew the No. 9 post position for the race that will conclude the Triple Crown in this topsy-turvy year.

There will be no fans at Pimlico Race Course, though some things were still the same on Monday, like Rodman opening the proceedings with his usual optimism: “It’s going to be perfect on Saturday, temperatures in the mid-60s here in Baltimore under sunny skies for Preakness 145!”

It could also be a near-perfect day for Bob Baffert if the two-time Triple Crown-winning trainer captures his record-breaking eighth Preakness, either with Authentic or Thousand Words, who drew the No. 5 post and is 6-1 on the morning line. Baffert’s assistant trainer, Jimmy Barnes, will miss his first Preakness in decades after Thousand Words acted up in the Churchill Downs paddock at the Derby, resulting in a broken arm.

Baffert, with his right hand man Barnes by his side, is undefeated when taking the Derby winner to the Preakness.

Jockey John Velazquez expects to take Authentic out to the front again and wonders if the pace will be slower without Belmont Stakes winner Tiz the Law, who was a runner-up to Authentic in the Derby. Tiz the Law is skipping the Preakness to prepare for the Breeders’ Cup Classic Nov. 7.

“He’s pretty quick,” Velazquez said of Authentic. “I just have to switch him a little bit. He’ll be on the lead no matter what.”

Art Collector, who was scratched from the Derby, appears to be the biggest threat to Authentic and is the 5-2 second choice on the morning line out of post No. 3. Trainer Tom Drury hopes Art Collector is on the lead the first time going by the stands, which will be noticeably empty.

“I’m happy with it,” said Drury, who believed it was the correct thing to do to scratch Art Collector with a minor foot ailment. “If this horse gets away good, he’s tactical enough that he can be forward and give (jockey Brian Hernandez) a little chance to see how the race is developing and then we can kind of take it from there.”

Filly Swiss Skydiver is next at 6-1 out of the No. 4 post. She’s looking to be the sixth filly to win the Preakness and first since Rachel Alexandra in 2009.

Thousand Words was a late scratch just before the Derby after falling in the paddock, the incident that injured Barnes.

“The good news is the horse is absolutely fine,” on-call vet Dr. Kathy Anderson said. “He’s returned to the stable area. Had a thorough examination by Dr. Kevin Dunlavy, his regular practitioner, and has been cleared for service with not a scratch upon him. So we’re very pleased with that outcome.”

They’re being run out of order because of the pandemic: the Belmont June 20, Kentucky Derby Sept. 5 and now the Preakness on Saturday.

“Weird year where everything is,” Asmussen said. “We’re a month after the Derby and a month before the Breeders’ Cup. It’s been very unique to say the least.”

“It was how he was doing at the time,” Mr. Big News trainer Bret Calhoun said. “The horse was training phenomenally well coming into the Derby. The mile and a quarter was a big part of it too and we really felt like he would relish that distance.”

Unlike the Belmont that shortened its usual marathon race given the order of the Classic races, the Preakness will be run at the traditional mile and 3/16, just shorter than the Derby. There were plenty of questions about Authentic’s ability to win at that distance after his performance in the Santa Anita Derby and when he barely hung on to win the Haskell in New Jersey in July.

“I never had thought stamina was a problem with him,” said Baffert, who replaced Haskell jockey Mike Smith with Velazquez and won the Derby. “There’s no better feeling than to win the Kentucky Derby.”

A close second might be winning the Preakness, which no one has done better than Baffert.