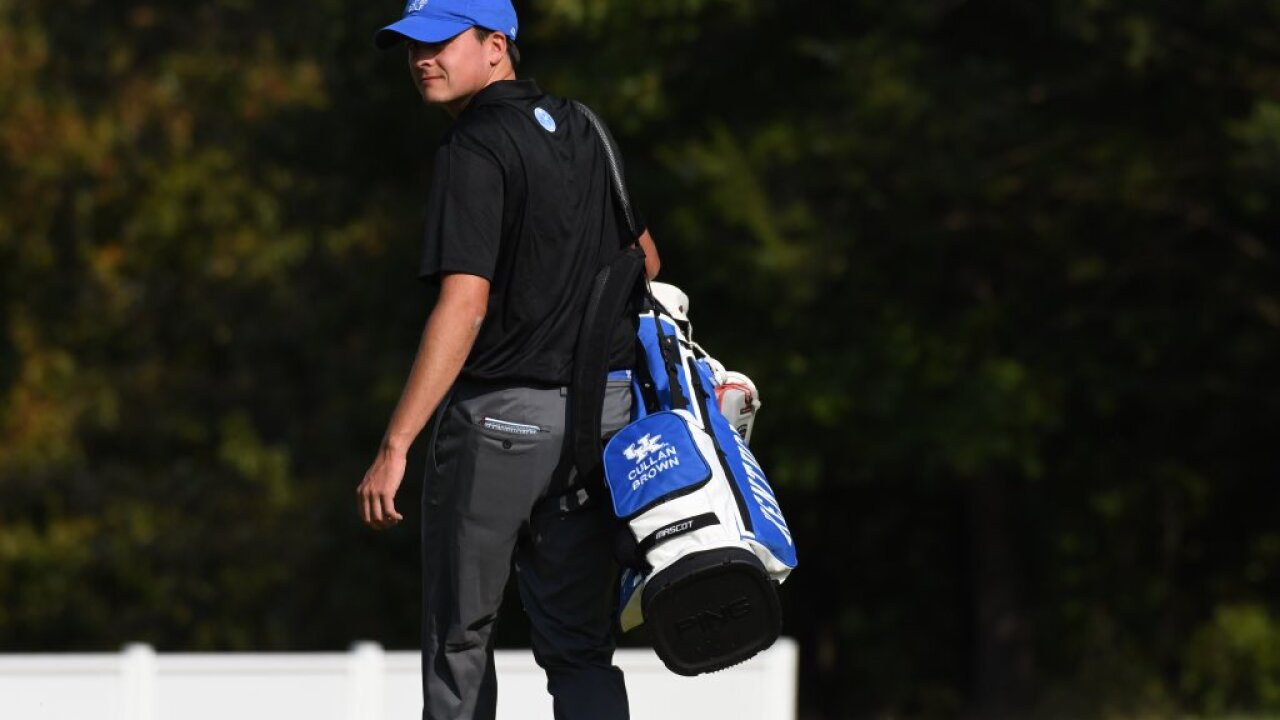 FAYETTEVILLE, Ark. — Powered by a spectacular and record-breaking round from sophomore Alex Goff who fired a 7-under par 65, the Kentucky men’s golf team enters Wednesday’s final round of The Blessings Collegiate Invitational in contention for an individual and team championship. Goff leads the field by four shots following his career-best showing as the Wildcats are four shots back of Alabama for the team lead with 18 holes to play.

Goff’s round of 65 marks a record for Blessings Golf Club during tournament competition. The previous record was a 66 by Oklahoma State’s Matthew Wolfe during the 2019 NCAA Championship.

He was not the lone Wildcat to shoot under par as Jacob Cook also turned in a sub-par scorecard with a round of 69 for a 3-under score. He is 1-under for the tournament and just outside of the top 10 as he sits in a tie for 11th.

The Crimson Tide used the lowest round of any team in the field on Tuesday to move into first place at 4-under par. Tennessee is second at 1-under par, followed by UK at 1-over heading into the final round.

“It was a pleasure watching Alex play today. He was so absorbed in the moment and played very smart golf all the way around this great course,” UK head coach Brian Craig said. “Cookie bounced back and played like the champ he is today. It is a good start, but there is still a long way to go. The truth is we don’t have anything but a good start. Staying in the present and continuing to play smart and aggressive golf is our only focus.”

UK begins its final round at 11:36 a.m. ET off at the No. 1 tee on Wednesday. GOLF Channel will continue to deliver live coverage from 3:30-7:30 p.m. ET. Live stats will be provided by golfstat.com.

To understand the Kentucky women’s golf team’s disappointment with its start to the Blessings Collegiate Invitational on Monday, one only needs to look at the spectacular second round UK put together Tuesday.

Proving that the BCI start will likely be an aberration as the season wears on, Tuesday’s round, a masterful turnaround that saw the Wildcats shave off 26 strokes from their first-round score, is more fitting of the big expectations UK has for this talented and experienced group.

One day after turning in their highest score in more than two seasons (316), the Wildcats bounced back with one of the best rounds in the field. With sophomores Marissa Wenzler and Jensen Castle and senior Rikke Svejgård Nielsen returning to form and freshman Laney Frye remaining among the leaders, Kentucky carded a 2-over-par 290 at the Blessings Golf Club (par 72, 6,171 yards) in Fayetteville, Arkansas. That propelled the Wildcats up four spots and into eighth place heading into the final round.

Tuesday’s 18-hole score was bested only by Arkansas and South Carolina, who sit in first and third place, respectively. Arkansas, the tournament host, leads LSU by six shots at 1-under par.

UK’s 26-shot improvement from the first round to the second is the largest in-tournament turnaround since October 2015.